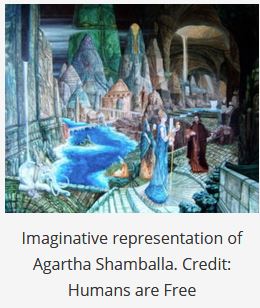 Sheldon explains what happened on the Earth’s surface to sink Lemuria and Atlantis and send the survivors to Agartha:

“Gaia previously was a pristine place with only occasional disruption. These disruptions were times when new ecosystems were introduced and new species obtained a period of domination. These periods generally lasted for many hundreds of millions of years. You arrived when such a change had recently happened….