Dr. Mercola, GuestWaking Times Electromagnetic fields (EMFs) have been shown to cause biological damage and even cancer, but exactly how does this happen? In this interview, Paul Héroux, Ph.D., a researcher and professor of toxicology and health effects of electromagnetism at the faculty of medicine at McGill University in Montreal, helps answer that question. Originally…Read more & video

Dear friends, good evening to you again. We are the Pleiadian Collective here to discuss the topic of honor. For so many of you and yours have displayed such valor and courage of late, that we would be remiss to not mention. The “White Hats” have been tried and remained true. The Alliance is strong,…Read more

via Pleiadian Collective: The Light Has Won — Era of Light

An infuriating and telling video has resurfaced showing CNN’s Wolf Blitzer call out Rand Paul for questioning the slaughter of civilians in Yemen, noting that the military-industrial complex needs war for jobs. The post WATCH: CNN’s Wolf Blitzer Says Slaughtering Kids in Yemen is Worth It Because It Creates Jobs appeared first on The Free…Read more

via WATCH: CNN’s Wolf Blitzer Says Slaughtering Kids in Yemen is Worth It Because It Creates Jobs — The Free Thought Project

We have the foresight to determine what is best for the human race in the long run, and we can give you messages and transmissions that will put you in a vibration that is more likely to influence you onto a particular timeline. You still have the free will to decide for yourselves what you are going to do, how you are going to vibrate, and which timeline you will ultimately choose.

It is more challenging for you because most of you only access the past and the present, but that is enough. It is enough to be present and to feel for the vibration of the timeline that you’re on. You can determine for yourself whether that timeline suits you or not. What becomes more challenging for you is when you attempt to take the temperature of humanity and determine the vibration that the rest of the collective is offering.

It can be very challenging for some of you to believe that humanity is headed in a positive direction at all, but that is usually due to the fact that you are tuning in to what the media is emphasizing. If you want to truly take the temperature of humanity, and access the truth of the collective’s vibration, you need to connect to Mother Earth and feel for the vibration that she is giving off.

You can also look at the people around you and notice how they are evolving. You can tell by how a person’s energy feels whether he or she is moving in a positive direction, and although it may be hard at times to notice, we know that you can feel for the progress in the beings that you connect with on a regular basis. We know that you can, with a little effort, feel for the motion forward that humanity is making, and you can rest assured that this timeline you are on now is one that will lead you to a more joyous journey, and ultimately, to the fifth dimension.

It is happening, my friends, the great awakening of all that was kept hidden. One by one, those within the Cabal are being exposed, and those who have supported and covered for them are falling. You are seeing people who only a few years ago you had trusted, being exposed as evil monsters who drink…Read more

via Montague Keen: It is Happening — Era of Light

May 1st, 2018 By Dr. Joseph Mercola Contributing writer for Wake Up World Vitamin D deficiency is associated with a substantially increased risk of dementia, including Alzheimer’s disease, according to a growing body of research. Vitamin D, once primarily known for its role in bone health, has traversed into the mainstream as one of the most important…Read more

Peace in the Korean Peninsula means the Khazarian mafia is now pulling out all stops in an effort to start World War 3 in the Middle East, multiple sources agree.  The result is that there is now a huge battle going on there that is likely to determine the fate of Israel and its ally Saudi Arabia, a collective we will refer to as Saudi Israelia.  The battle will also determine who rules the West—satanic bloodlines, or the people.

This is why Israel last week attacked Syria with nuclear weapons and thus left itself open to Russian retaliation, Pentagon sources say.  Video of this nuclear attack is being systematically scrubbed from the Internet, but at the time of publication of this newsletter it could be seen here:
https://www.youtube.com/watch?v=0myBgHQdnBc

There are signs that the nuclear attack may have been Saudi Isrealian retaliation for the assassination of Crown Prince Mohammed bin Salman, the de facto ruler of Saudi Arabia.  Crown Prince Salman has not appeared in public since heavy gunfire was reported inside the royal palace last week.  The only person trotted out for the press when U.S. Secretary of State Mike Pompeo visited over the weekend was the fake king.
https://www.zerohedge.com/news/2018-04-21/gunfire-explosions-heard-near-saudi-royal-palace-king-salman-reportedly-evacuated
http://www.arabnews.com/node/1293416/saudi-arabia

However, the fog of war is especially thick in the region now, so we will not know a lot of what is going on until the dust settles a bit more.

In any case, it is clear Saudi Israelia is increasingly isolated in the region, as Turkey, Iran, Egypt, Qatar, Iraq, Syria, and other regional powers line up against them.  Now, the U.S. decision to withdraw its troops from Syria into Iraq is a sign to the Russians and their allies that the U.S. military will not defend Saudi Israelia from any Russian attack as long as U.S. control of oil resources in the region is not threatened, Pentagon sources say.

This struggle is not limited to the Middle East, but is also raging under and above the surface in Europe, the U.S., and Russia as the old satanic bloodline families struggle to retain control of the planet Earth.

A visible sign of this epic battle was seen when French Rothschild slave President Emmanuel Macron visited U.S. President Donald Trump last week.  This was captured in the photograph below, sent by Pentagon sources. 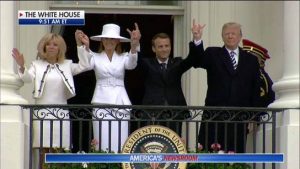 The Pentagon caption is as follows:  “While Macron displays the satanic hand signs, Melania Trump on April 24 sends a message to the Rothschilds that white hats are in control.”

At his meetings with Trump, Macron pretended to support the Iranian nuclear accord that supposedly keeps Iran from having nuclear weapons, while in fact the Rothschilds have been providing Iran with…

(Disclaimer: The following is an overview of the current situation based on rumors from several sources which may or may not be truthful or accurate.)

Israel’s government refuses to surrender and is attempting to negotiate terms with the Alliance.

The Alliance is no longer accepting negotiations.

Turkey and Zimbabwe are making moves to release a gold-standard currency.

All countries are gold-backed under the new financial system.

What you see publicly is merely soft disclosure for the new financial system.

Once it begins, the world is in your hands. Embrace it and nurture it. Gaia and it’s inhabitants need you.