Beloved child; it is time to get back to the basics, keeping it sweet and simple.

As you move forward from the doing phase of your incarnation into the being phase, you start to step away from what you feel you should do into what you feel guided to do. (Be aware of the word should, for it often involves judgment of self and dismissing your true wants and needs. It is an indicator of operating through the mind and attempting to work against the energies, while being guided is being led by the heart which is loving, connective, and works with what the energies support).

By allowing yourself to move how you are guided to, you begin to surrender and flow into your highest good, which automatically honours the highest good of others. Because you are surrendered into what your best service is however it wishes to present itself that day, you step out of the second guessing of yourself into deep trust in the unfoldment, which allows far more presence and peace than you have ever experienced before. ~Archangel Gabriel through Shelley Young 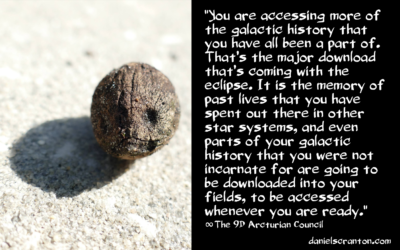 We are happy to see so many of you in your place of expectation and excitement. We know how excited you get when you have a major occurrence in your skies, and the eclipse falls into that category. So you are preparing yourselves for something magical, something rarely seen, and more importantly, something that you can feel. Those of you who are awake are also sensitive, and you can not only tap in to the excitement of the human collective. But you also tap in to the energies of your celestial bodies, and you feel their love and the intention that they hold for you.

So of course, you can expect some emotions to come up around all of this as well. You can expect lots of changes, especially in the physical and emotional realms. You will want to treat yourselves especially kindly and make sure you are hydrated. You will want to rest and relax as much as possible, because you are not just witnessing an event in your skies. You are also receiving more of the high frequency energies that are continuously bombarding your planet.

Some of you will access these memories in dreams, others with a clear knowing of something that you did or something that happened in one of your lives in one of the other star systems. And some of you will experience trauma and emotions coming up. Of course, the bright side of this is that you will also have greater access to those aspects of yourself that lived in those past lives, in the other parts of the galaxy.

And as you access their energy and the information about those lifetimes, you access more of you. That’s what this journey is always about.

To be identified with anything false is very dangerous, because then the search for the real stops.

A Clinton Child Sex Trafficking Network, whose elite supporters were believed to include Hollywood stars and prominent politicians, face August unsealing of federal indictments, most of which were believed to concern child sex offenders. Over the past year multi thousands of sealed indictments have been filed in every state of the union. Charges have also been filed that indicated years of coverup of Clinton child pedo crimes through use of the FBI, CIA, Department of Justice, Mainstream Media, Twitter, Google and Youtube.

Evidence appeared to indicate that not only the Clintons, but Mueller, Comey, Clapper, Podesta, Rosenstein, Rice, Biden, Strzok and others in the Department of Justice, FBI and CIA were linked to child sex trafficking, torture and murder under a sophisticated structured that included extensive cover up of their crimes. CLICK HERE

Child sex trafficking coverup by the Clintons appeared to go back to at least 2013 when NBC News reported that Robert Mueller buried pedo child crimes of Clinton’s State Department while Hillary Clinton shut down a pedophile investigation.

More recently Sarah Ruth Ashcraft, who claimed to be a Mind Controlled Sex Doll bought and sold by Hollywood Pedo Elites including Tom Hanks, mentioned Hillary Clinton as one of her childhood perpetrators in this July 25 video:  https://www.youtube.com/watch?v=hBx1S3x-Kzo

The New York police found something a whole lot worse about Clinton, if that’s possible, on Anthony Weiner’s laptop. A folder called “Life Insurance” was said to contain a film that showed Hillary and her assistant Huma Aberdin sexually assaulting, raping and torturing a pre-teen girl to death. “What’s in the emails is staggering and as a father, it turned my stomach,” the NYPD Chief said. “We have copies of everything. We will ship them to Wikileaks, or I will personally hold my own press conference if it comes to that.”

It was well known that there were at least 26 times that Bill Clinton flew on convicted pedophile Jeffrey Epstein’s Lolita Express to visit “Pedophile Island” in the Bahamas, plus Hillary visited there at least six times. The island had been extensively designed for elite Satanic worshippers where children were believed used as fodder for sex and murder rites. On 14 April 2018 structures above and secret chambers below this island were destroyed using military grade war explosives. Destruction was done, it was assumed, to erase evidence of child abuse, though at least one video of children sitting naked in a tunnel was saved.

Ex CIA investigator Robert David Steel claimed that an informant from the graphics department of the State Department said that they were not allowed to portray anything regarding child trafficking within the US. He felt that there were too many Obama holdovers in government who were working for the Deep State against Trump and his war on child sex trafficking. Steel also claimed that when Hillary Clinton was Secretary of State she wouldn’t appoint an Inspector General, so no investigations of missing immigrant children happened then either.

Hillary Clinton emails on Bengazi and what was thought to be an international child trafficking pedophilia ring known as Pizzagate or Pedogate were found by Seth Rich prior to the 2016 Presidential Elections. Rich, an employee of the Democratic National Committee(DNC), turned the emails over to Wikileaks, where they were exposed to the public. On July 10 2016 Rich was fatally shot after attending a party where he was said to talk about the emails and just prior to his congressional testimony on Clinton.

Today July 25 the Mainstream Media remained true to form in keeping up the crystal clean Clinton image. They announced that Hillary (along with her friends Colin Powell and Madeliene Albright) would be guest stars on the season premier of “Madam Secretary” on 7 Oct.

Some tough realities may be coming at you hard and fast.  What you thought would be or could be has changed in the blink of an eye, leaving you spinning and unable to find your center.  When you find yourself in the middle of one of these all-consuming experiences, please remember this; The Universe has always had a plan for you.  Yes, there is free will and the ability to choose an infinite number of paths, but there has always been an end result set up and waiting for you.  How you get there has always been up to you. Listening when you are in the throes of a trying time is not always easy, but it can be done.  Even though it may be challenging; ask for clarity, remember to breathe and know The Universe is there to support and love you while offering another perspective. ~ Creator

With your awareness, we suggest you pay attention to how many times you deem yourself, or others, wrong. You might be surprised to discover it is far more often than you realize. This is a good indicator of how much resistance you are still experiencing towards life.

To shift out of this, you may wish to simply observe when you fall into that habit and then refocus. You might try an affirmation that feels good to you. You could try, “We are all beloved aspects of Source.” “God is guiding me now.” “We are all doing the best that we can.” “We are all in this together.” “Everyone is the master of their own path.” “Everyone has their own innate wisdom as well as the assistance of guides and helpers.” “I trust in the unfoldment.” “I choose to remember who I really am.”

Before you are in a state of resistance, think of an affirmation you can use that helps you feel the energy of acceptance. Even a simple, “I love you”, is a wonderful go-to statement you can apply to yourself and others, for it includes rather than separates, which is an act of acceptance. When you get out of the well entrenched habit of resistance, Dear Ones, you will find much more flow, peace, and comfort in all areas of your lives. ~Archangel Gabriel through Shelley Young