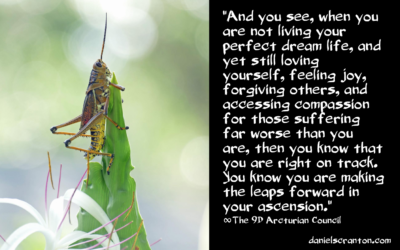 We have the perspective on your progress that we wish you could share with us. We want very much for you all to be as happy with where you are as we are for you. We would love to see more of you measuring your progress by the amount of love and compassion that you feel for others and for yourselves. When you first learned about the truth that you create your reality, many of you began measuring your spiritual progress by how much your reality then matched your desires for it.

But, of course, there’s more to the story. You also need to give yourselves reasons to expand and become more of who you really are, and the best ways to do that are to not create the reality that is most pleasing to you and to not always get what you want. This is how you give yourselves opportunities for unconditional love, self-love, compassion, and unconditional joy.

If you didn’t first give yourselves opportunities for those experiences, then how could you have them? And you see, when you are not living your perfect dream life, and yet still loving yourself, feeling joy, forgiving others, and accessing compassion for those suffering far worse than you are, then you know that you are right on track. You know you are making the leaps forward in your ascension.

You see, once you are fifth dimensional, you will be able to create whatever you want, whenever you want it. But for now, you still experience the illusion that you’re not creating it and you’re not experiencing it. This is not a test. You are not being tested by Source. You are Source, and you giving yourselves the opportunity to know that more fully and completely than you could if you just waved your magic wand and made everything in your life, and in the rest of the world, exactly as you want it to be.

As you step through this most recently opened door, it is in your best interest to keep your wits about you.  Many distractions will present themselves in an attempt to draw you away from your path.  It is imperative to stay focused and grounded or, in other words, ‘keep your eyes on the prize’. (Smiling) The growth, learning and clarity coming to you now will be of great use in the coming months.  Be present, be real and keep an open heart to the amazing coming your way! ~ Creator

Your underlying fears that get triggered and bubble up are much like a toddler who is overwhelmed that suddenly acts out and tantrums. If you respond by being reactive, you know you only accelerate the energy. When any portion of you is at overwhelm it needs calm, consistent love and reassurance. It is looking for your empowered self to compassionately understand what is going on, to take the lead, and create a space of safety where needs can be met. This is absolutely a role you can assume just by taking a moment of exploration and awareness, to honour all parts of yourself, to shepherd and include, with your own unique wisdom and understanding. ~Archangel Gabriel through Shelley Young

via Message from the Angels: Focus on the Light — Era of Light

Notice to readers:  For the next three weeks, barring some unprecedented news event, the reports will be pre-written as I take my annual sabbatical off the grid and off the Internet.  Your understanding is appreciated.

As we prepare for what may be the final autumn offensive that finally overthrows the Khazarian mafia cabal, it’s a good time to look at the big picture to understand why a secret battle for the planet Earth has been raging all these years.

The best place to start is still the U.S. election of the year 2000, which was a coup d’état against American democracy that started the Nazi Fourth Reich headed by Fuhrer George Bush, Sr.  That election was between two Western secret government factions:  Faction 1—the Nazis, who wanted to kill 90% of humanity in order to “save the environment”;  and Faction 2—the Global Warming faction, who said this could be accomplished by using “global warming” as an excuse to impose a carbon tax and a world government.

The Nazis won by using fraud, murders, and death threats to terrorize the U.S. establishment into handing over power.  This was followed by very real attempts to murder 90% of humanity.  The Nazi regime of George Bush, Jr. began spreading bioweapons like SARS, weaponized bird flu, Ebola, etc. to wipe out most of humanity.  At the same time, they created starvation crises in 33 countries by paying farmers money to grow “biofuel” instead of food.  They also tried multiple times to start a nuclear world war using Iran, Syria, North Korea, and other hotspots.  This is important to remember and cannot be repeated often enough:  these people tried to kill you and your family, and are still trying to do so.

Enter the Asian secret societies.  They learned of the Nazi plans to murder 90% of humanity by successfully eavesdropping on their secret meetings, notably the Bohemian Grove gatherings.  In 2003, the spreading of SARS—a bioweapon designed specifically to target only Asians—was their real call to arms.

This led to a rupture between heroin- and amphetamine-dealing East Asian underworld groups and their cocaine- and marijuana-dealing former Nazi allies.  The Nazis, however, anticipated this break by moving their heroin operations from East Asia to Afghanistan during 2001–2002.

The Nazis, as they described in their report “Project for a New American Century,” also tried to cement their control of the world by seizing the oil fields of Iraq and Central Asia.  They use the threat of cutting off oil to keep Asia under control.

The Asians responded by threatening to assassinate the top leadership of the Western secret government.  In particular, they targeted the individuals who were members of all three of the following groups:  the Bilderbergers (European cabalists), the Council on Foreign Relations (American cabalists), and the Trilateral Commission (Japanese quislings and their masters).

The Asians also looked for Western allies against the Nazis.  They noted that a Western faction had been fighting desperately to expose and derail the genocidal plans of the Nazis.  This can be seen, for example, in a 1997 episode of “The Simpsons” showing a book entitled Curious George and the Ebola Virus.  “Curious George,” of course, refers to George Bush, Sr.
http://www.dailymail.co.uk/news/article-2786966/How-The-Simpsons-predicted-U.S.-Ebola-outbreak-1997-Episode-shows-Marge-offering-sick-Bart-children-s-book-Curious-George-Ebola-Virus.html

There was also the BBC reporter standing in front of the still-intact World Trade Center Building 7, saying it had collapsed.
https://www.youtube.com/watch?v=677i43QfYpQ

The Asians founded a group of Western allies who became what is known as the White Dragon Society (WDS).  This group includes senior people in the Pentagon, the CIA, the Russian FSB, the British Royal Family, Freemasonry, the Vatican P2 Lodge, etc.

This group attempted to bankrupt the U.S. in 2008 with the engineered Lehman shock as a way to bankrupt the U.S. Deep State—the Khazarian mafia in the U.S.  The Americans were told at the time they were no longer able to buy goods from the rest of the world on credit.  That is why the U.S. trade deficit went from over U.S. $696 billion in 2008 to $381 billion in 2009 after the Lehman shock.
https://tradingeconomics.com/united-states/balance-of-trade

The attempt to bankrupt the U.S. Deep State would have succeeded, too, except for the fact that the U.S. forced Middle Eastern client states to cut the price of oil they sold to the U.S., and the Chinese were fooled into supporting Communist agent Barack Obama and financing his regime.  Only later did they realize he was just a Bush/Clinton/Rockefeller slave.

Also around that time, in a series of episodes never before revealed to the public, handwritten letters were sent by the WDS to the Chinese Politburo, the Vatican, and the British monarchy that…

My dear fellow Patriots… Hmm…I am so very glad to see that word “patriot” being used in such a positive and noble manner, now. I have been watching as so many truly astounding and soul-shaking events are unfolding, currently. For now, those who recognize the Truth in these events are few, as compared to the….Read more

via A Message from JFK: Stay the Course — Era of Light

The further along you move into this great shift, the more you will begin to see the falseness people have been using as protection is becoming less acceptable.  Those that continue to operate in this way may become angry or upset because this particular ‘tactic’ is no longer working and you no longer choose to ‘get with the program’.  If you are a human that has embraced honesty and integrity, it may be very frustrating when you encounter them.  Please, do not be dismayed or take this personally.  Rather than seeing you for who you are, they are receiving a direct reflection of what they need to release and who they need to become. (Smiling) The world is in flux, dear one!  Keep embracing who you are and know that, even though others may not ‘get it’ yet, they will.  Until then…carry on, you are doing fantastic work! ~ Creator

When you are emotionally triggered by another the first thing to ask yourself is what fear has been activated in you. Is it true? Is it a real threat? Is it even yours? Is it pertinent to today or is it old energy? Explore the fear and the emotions that drive it.

Then ask yourself what empowered steps you can take now to create beyond the fear based on who you are today. Your fears stem from a feeling of powerlessness. Your ability to shift into being a conscious co-creator will allow you to put that fear to rest and to navigate beyond it. It is this practice of self exploration and self guidance that will allow you to stay in a far more centred space during periods of energetic intensity. ~Archangel Gabriel through Shelley Young