It’s truly shocking just how many revelations have come to light with regards to the physical and sexual abuse of children within the realm of the global elite. The big four areas where this activity seems to be most prevalent nowadays is within politics, the Vatican, the military industrial complex and inside of Hollywood. Within…Read more & video: “Isaac Kappy Outs PEDOPHILES IN HOLLYWOOD. BIG NAMES DROPPED IN THIS VIDEO”

What will be your response today?  Over the next few days, weeks and months, there will be situations presenting themselves that may test your abilities to the fullest.  It may be something small and seemingly insignificant or a huge life change.  The most important thing to remember is to breathe, take a step back and think about your reaction.  Will it be in line and appropriate with the situation at hand or will it be ‘off the hook’?  Will you be honest with yourself and others or will you skirt the issue?  Regardless of what it is, you always have a choice.  The measurement of your true growth is having the response being in line with your abilities.  Think about it… (Smiling) ~ Creator

What if you decided to treat yourself with the same love and consideration you would give a beloved child? What if you consciously filled every act of self care, such as brushing your teeth, bathing, or any other form of tending to your with love? What if you made decisions as lovingly as you would for a child when it came to your diet, your health, your wellness? What if you nurtured yourself as automatically as you would that child in all ways.

What would happen is you would begin to thrive under your own care. You would put yourself first, not as a means of separation from others, but because you are equally important as everyone else. Your inner child would feel safety and heal because its needs were being met. From that space you would support yourself with love, compassion, and acceptance, being your own encourager and understanding guardian, and that would create profound change in all areas of your life.

Try it. You might be surprised to realize that it’s been your own love and acceptance you’ve been yearning for for so very long, and how whole and satisfied you feel when you finally include yourself in your own tender care. ~Archangel Gabriel through Shelley Young

In another bombshell interview on the Cosmic Disclosure Gaia TV series, insiders Emery Smith and Corey Goode have revealed their direct knowledge and participation in classified programs that involved the detention, interrogation, torture and dissection of human looking extraterrestrials. Their stunning eyewitness accounts provide powerful evidence that atrocities have been occurring in classified programs against….Read more

The shadow ruling force behind the central banks

Secrecy is repugnant in a free and open society

The Central Bankers’ crimes are legendary and more than can be listed here. By providing large-scale loans to practically all countries and people, those have become dependent of the hidden ruling power. Governments that want to remain independent are vigorously addressed and enforced; their leaders are unseated, or murdered. If this is not possible through means of political propaganda, or being economically sanctioned, the CIA, Mossad, or otherwise military force will achieve their objective to submit them to the NWO-regime. 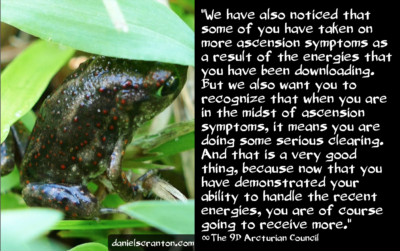 We have been exploring the new timelines that have become available to you since the recent energies of the eclipses and the Lionsgate Portal. The reason that these new timelines are now available to you is because of how well you have assimilated these high frequency energies. Now, in addition to opening up these new possibilities, you have also vibrated out of range of some less-than-ideal timelines.

And therefore, we welcome you all to take the opportunity to pat yourselves on the back and to take it easy. We have also noticed that some of you have taken on more ascension symptoms as a result of the energies that you have been downloading. But we also want you to recognize that when you are in the midst of ascension symptoms, it means you are doing some serious clearing. And that is a very good thing, because now that you have demonstrated your ability to handle the recent energies, you are of course going to receive more.

Those of us in the higher realms are always watching to see how well you are handling the energies that you are receiving. And when we see that you are doing quite well, we line you up for some more. This is how it’s going to be, because this is the journey that you signed up for. But not to worry, because these energies that are forthcoming are going to be much easier for you to handle. If you are experiencing ascension symptoms, then these are the types of energies that will fill in the gaps from what you have purged. And there is a lot of purging going on.

We know that this journey has not been very easy. For those of you who are awakened, it has been especially challenging because you agreed to take on so much for the rest of humanity. Remember, however, that the rewards will be great. And also, recognize that it is so much more meaningful of a ride because you are awake. We also invite you to recognize that the experience of managing these energies is making you all into quite capable creator beings.

By Greg Hunter’s USAWatchdog.comFormer CIA Officer and whistleblower Kevin Shipp says what Hillary Clinton did with her charity and Uranium One while she was Secretary of State was a crime for the history books.Shipp explains, “Hillary Clinton used this to launder money in foreign banks so it wasn’t subject to U.S. laws, congressional subpoenas or…Read More & video: “Kevin Shipp – Indictments Coming for Hillary and Co-conspirators”

Notice to readers: This is the last of our three pre-written reports. We will return to our usual weekly news format next week. Your patience and understanding have been appreciated.

Last year, Russian President Vladimir Putin said whoever leads in AI (Artificial Intelligence) “will control the world.” The Chinese took these words seriously and are investing huge sums of money in an effort to create an AI “Goddess.” They hope it will give them unprecedented powers and help them in their bid to form a world government, according to members of Asian secret societies.

The West, for its part, is building a quantum-based financial system they hope will allow them to continue to control the main source of world power—the international financial system.

This battle is serious, and it even led to the Chinese supercomputer Tainhe-1—at one point the world’s fastest—to be blown up by unknown parties on August 12, 2015. The fact that this explosion came immediately after a sudden unannounced 4% devaluation in the Chinese yuan was almost certainly no coincidence. The fact that the European-headed IMF supported this move shows that the European faction of the Khazarian mafia was in on the plot.

Clearly, some sort of Chinese and European Khazarian attempt to use the devaluation and the supercomputer to destabilize U.S. dollar-based Western financial system did take place and was met with a kinetic response.

Now fast-forward to the third-year anniversary of this explosion. As of June 2018, the U.S. Department of Energy surpassed the Chinese with the world’s fastest publicly acknowledged computer. The system—called Summit—can process 200,000 trillion calculations per second, or 200 petaflops. That’s eight times faster than America’s former top supercomputer, the Titan, and it maintains a big lead over China’s 93-petaflop TaihuLight, which had been the world’s fastest supercomputer since 2016.

Senator Rand Paul believes that WikiLeaks founder Julian Assange should be given immunity in exchange for him testifying before the Senate Intelligence Committee.

Read more at: The Gateway Pundit

Russian Collusion: It Was Hillary Clinton All Along

Russia Investigation: It’s beginning to look as if claims of monstrous collusion between Russian officials and U.S. political operatives were true. But it wasn’t Donald Trump who was guilty of Russian collusion. It was Hillary Clinton and U.S. intelligence officials who worked with Russians and others to entrap Trump.