(Natural News) It’s time to call for the arrest and prosecution of top Democrat lawmakers for treason. Nancy Pelosi, Chuck Schumer, Adam Schiff and Mark Warner have all signed a letter demanding the FBI and DOJ defy the declassification orders of the U.S. President. They are demanding this in order to hide their own criminality,…..Read more & video:”Demon-crats Call To Defy Trumps Order To Declassify FISA Documents”

via It’s TREASON! Pelosi, Schumer, Schiff and Warner now engaged in open insurrection against the United States of America — NaturalNews.com

Before being cut from almost all means of communication with the outside world in March, WikiLeaks founder Julian Assange, who remains in the Ecuadorian Embassy in London, has shared his outlook on threats the humanity faces in connection with AI development and data protection…Read more & video:”Exclusive Coverage LIVE from the World Data Forum: Julian Assange’s Last Communications”

The whisperings of your past may come to call soon. Dear one, this is not something to be fearful of…it is a gift!  Some of them may bring up feelings of guilt, shame, sadness, anger or disappointment.  The Universe is reminding you that they have been sent, in this moment, for resolution and release.  These quiet echoes remind you of who you used to be, how you have changed and point you to what you will become.  Gratefully accept it as a new way of growing and learning about yourself.  Once that have completely passed from your life, a certain peace and calm will settle.  You have earned it, you deserve it and you are most certainly worth of it. ~ Creator

Being easy with yourself when things come up for healing allows you to shift with far greater ease with the assistance of your own love and nurturing. Every single time something comes into your awareness for healing or release, it is indicating that you are becoming lighter, more authentic, more aligned, more shifted. It is a wonderful thing to celebrate, that it is no longer a match for you to carry that old fear or wound and that you have worked and evolved to the point where it can now be let go. It is proof positive of your own evolution. Isn’t it time to be a loving guide and support to yourself through these moments of transformation that can often make you feel temporarily vulnerable by creating a space of safety with your own care and understanding until you reach a place of comfort with your new level of beingness? ~Archangel Gabriel through Shelley Young

The Facts: Robert Bigelow, founder of the Bigelow Aerospace Corporation lets the world know that he has knowledge that we are not alone, and that we are currently being visited by intelligent extraterrestrials. Reflect On: Bigelow is just one person, but he is joined by hundreds of others with impressive credentials. These people have been…..Read more

via Aerospace Insider on Aliens: ‘We Don’t Have To Go Anywhere To Find Them, They’re Already Here’ — Era of Light 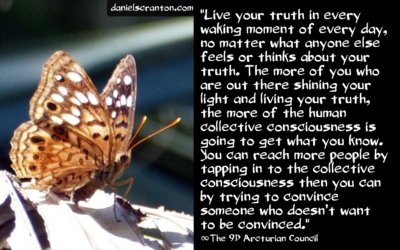 We are surprised and excited to see how many people are waking up every single day. We have noticed this trend occurring as you get closer and closer to the equinox, but we also notice that there is a portion of the population who are struggling. They are struggling to find something to believe in, and they have not been able to make a leap of faith to the truth that we are all one and we are all Source. They certainly are far from believing that they create their reality.

We have been looking for ways to reach this particular group of individuals on your world, and we know that at times you will attempt to share something with one of them to bring them into the light, to help them awaken. But you are going to have a hard time convincing someone of something when they don’t really know what they believe in. So it is much more effective if you just hold space for those individuals. Send them love. Have compassion for them, and live your life without apologies.

Live your truth in every waking moment of every day, no matter what anyone else feels or thinks about your truth. The more of you who are out there shining your light and living your truth, the more of the human collective consciousness is going to get what you know. You can reach more people by tapping in to the collective consciousness then you can by trying to convince someone who doesn’t want to be convinced.

But know that those who are looking for something to believe in are always served by having those like you around. Your presence, and the knowing that you hold within you is enough to bring one or more people to the light.

Gavin Nascimento, Guest Waking Times Did you know that there was a shocking study published in the Public Library of Science Journal, that found“up to 72%” of scientists admitted their colleagues were engaged in “questionable research practices,” and that just over 14% of them were engaged in outright “falsification”?[1] If that’s not bad enough, between 1977 and 1990 the FDA found scientific…..Read more

Sacred code of honour against the Evil Enemy

Our unity is the antithesis of the ego-worshipping Deep State psychopath. Our strength is our desire for freedom, righteous intent and collective unity to overcome our enemies in our government, and the criminals in the banking system. As such, the proclamation “Where We Go One We Go All” is also the inscription on the ship bell on the yacht of John F. Kennedy, adding an extra dimension to the significance of this slogan. This has made this motto a sacred

code of honour against the evil enemy.

The darkness will lose its grip of fear upon us, as more people awaken from their induced slumber. This could mean that in the next month or so, unprecedented revelations will be forthcoming, both in scope and magnitude without historical precedent, that could cause a revolt under the un-awakened part of the population.

Detaching oneself from the mind control programming

Choosing to become conscious means detaching oneself from the mind control programming; escaping the effects of the physical, mental, emotional and spiritual prison caused by the oppression of among others, the MSM.

The real rulers in Washington are invisible and exercise power from behind the scenes. Today the path to total dictatorship of the world can be laid out through legal means, unseen and unheard of by Congress, or even the

President. The Deep State operates freely within our government and political system, through bribed politicians called puppets. All strange developments in policy agreements may be traced back to this secret group who are endeavouring to create a world to suit their purpose.

The tactics employed are comprised of the manipulation of economies, trade and the masses through fear: fear of war, fear of starvation, fear of economic collapse, imprisonment and death. This fear-mentality has dictated global events for centuries and has become the standard operating procedure. This process of enslaving civilisations stands in contrast to the survival of humanity and it suppresses the natural instinct of all humans to do good and to be kind to one another.

Bear in mind; the real purpose of government is always and everywhere, to enable the few to exploit the many. The credit money system is a clever way of doing so.

Read more at: The Final Wake Up Call