Two new videos and a trailer – new to me, anyways! – on Disclosure.

First, None of This Makes Sense, apparently from Gaia TV, on sightings of spacecraft near the lunar surface.

Second, The Video You’ve Been Waiting For, a historical exploration of UFO investigations and cover-ups.

And, third, a trailer, announcing the upcoming release (end of October) of Jordan Sather’s Above Majestic.

Jordan has done yeoman’s work tracking the draining of the swamp. Here he turns his attention to a persistent love of his, full disclosure.

Majestic 12 is the code name of a secret committee of scientists, military leaders, and government officials, formed in 1947 by an executive order by U.S. President Harry S. Truman to facilitate recovery and investigation of alien spacecraft. 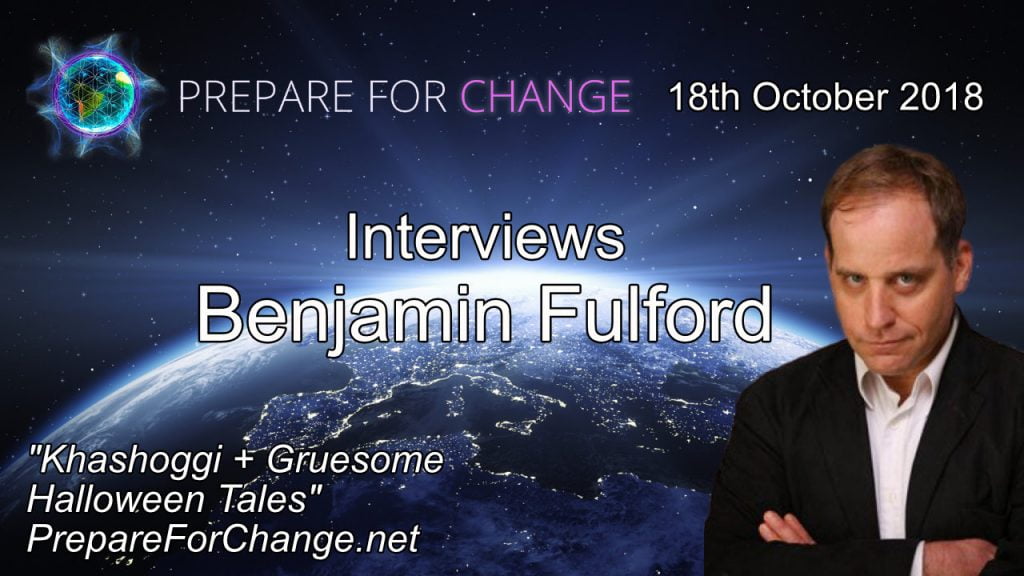 On October 18, 2018, Richard and Meg of PrepareForChange.net continued 2018 interviews with Benjamin Fulford.

The transcript will be posted here, in a week or two, below the links to the previous 2018 interviews.

Warning: There is some graphic information described in this interview.

Benjamin talks in this interview about how the disappearance of the Khashoggi, the Washington Post columnist, is related to other unrest in the Middle East as well as even Japan, that Crown Prince Bin Salman was taken out in April, and he discusses other recent worldwide evidence that the old order is not working any more.

Benjamin Fulford Continues to Work to Liberate the Planet

This interview is about 50 minutes long and we hope you enjoy it.

Donate to Children in Malawi. They Have No Parents.

We are an all-volunteer organization. We do set aside a little money to support our website, but nearly all of your donations to PrepareForChange.net support about 400 children in an orphanage we funded in Malawi, Africa.

There are things in your past that have made you who you are today.  A person, place or thing came into your life and changed everything from black & white to color in an instant.  Those micro-seconds created beauty where none existed before.

Today, you are being asked to explore your past, to bring those amazing moments into your now.  Use those feelings to create something wonderful for yourself, to embrace what is coming and to learn that, yes, you can experience it again.  There is joy in living and where you are headed now may need that extra boost to keep you moving.  The Universe has given you all the tools you need, now it is time to start using them. ~ Creator

Radio host Dr. Janda says, “I would say we are winning. The reason I say that is all these judicial appointments. . . . I believe we have a five to four rule of law majority in the Supreme Court. I believe (DOJ prosecutor) Huber has been working on these indictments behind the scenes, and they will be unsealed as soon as the declassification occurs. I believe military tribunals have been set up and will become more overt in their operation, but that doesn’t mean we have already won. We are winning, and we are in the process of winning. We have not won. That’s why I believe these midterm elections are so important. This is why we are seeing the hysteria out of the Deep State players that are the mid-level puppets. This is why we see the Bookers, the Clintons, the Obamas and Bidens all lashing out. They know if people vote for rule of law candidates across the board and don’t buy into this agenda that the globalists are putting forward such as no border security, sanctuary cities, raising taxes, and if you don’t vote for us, we are going to beat the hell out of you, if they don’t buy into that agenda, the Deep State players know the rule of law will be implemented like it’s not been implemented for decades in America. The Deep State globalists are in the crosshairs of a true justice system as opposed to a justice system that is just smoke and mirrors.”

Mexico is cooperating to stop the caravans into our country more than we count on the Democrats to put us first. “Immigration” is all Dems have to run on.

About the water, The Deep State would rather make deals with selling water to the off planet controllers, while we starve and struggle under the Georgia Guidestone Agenda 21 population elimination plan.

Not on Trumps watch. Vote for life.

(Natural News) It’s that time of the year again: Flu season! Doctors, nurses, pharmacies and even well-meaning relatives may be pushing you to get the flu shot, but it’s important to note that these vaccines are by no means as safe, effective or free of side effects as the drug manufacturers and medical community would…..Read more & video

via Four rational reasons to avoid the flu shot and what to do instead to protect your health — NaturalNews.com

Countries around the world are turning to gold as uncertainty about the global economy rises. Trade wars and the aggressive policies of the United States are making emerging economies withdraw from dollar assets, analysts told RT. “In the near future we can witness a big change in the rules of the game. At the beginning…..Read more