October 26th, 2018 By Dr. Joseph Mercola Contributing writer for Wake Up World Known as “the Monsanto papers”, the evidence presented in legal cases against Monsanto includes email correspondence and corporate documents that create a comprehensive narrative of the corporation’s malfeasance and collusion with U.S. regulatory agencies. The Australian documentary, “The Monsanto Papers” (featured below), reveals the…..Read more & video: “The Monsanto Papers Documentary”

Cars sales have imploded, dealerships are seeing a drop in traffic and its getting worse. New home sales implode and it doesn’t look good for real estate. The economy is deteriorating very rapidly and we are seeing a deterioration in all sectors. The statistical numbers do not tell the whole story if we go back in time we saw the same number and the economy was in a recession. Trump continues with his attacks on the Fed, this is part of the plan and the push to shape the narrative. Trump actually came out and said that the Fed is wrecking the economy.

Rod Rosensteins closed door meeting with senate officials has been canceled. Judicial watch is now suing the DOJ for conversations of Clinton, Obama and the rest. The illegal immigrants are making their way up to the border this is part of the deep state plan. Packages were sent to Obama, Clinton news orgranizations, Brennan and the more individuals. The package had a bomb, this seem to be part of the plan to try to get the sympathy vote. Trump countered this by telling the country to come together.

Since the start of recorded history, psychic abilities have been documented, exposing the supernatural gift that some possess to look beyond the physical world and reach into the spiritual one.

Throughout the past, our mental abilities have been a topic of mystery; often being attributed to certain individuals’ ability to control matter simply by thought, giving birth to numerous supernatural theories related to Alchemy and prophecies, communicating with non-physical entities, travelling outside of one’s physical body, supernatural healing, supernatural levels of strength, hypnosis, telekinesis and much more.

The creator of this video describes a declassified CIA document available online, which outlines the Chinese government’s interest in parapsychology, remote viewing, telepathy, psychokinesis, etc. The document is titled, “Chronology of Recent Interest in Exceptional Functions of the Human Body in the People’s Republic of China.” It was declassified through a Freedom of Information Act request and it outlines specific people with very special abilities and how they’ve been studied by thousands of scientists and governments around the world for a very long time.

Scientists have been exploring the mind-matter relationship for more than a century and they have established that consciousness or factors associated with consciousness do, in fact have observable effects on what we call the physical, material world although they are very small.

The US military has had an interest in parapsychology, as evidenced by the US Army’s Stargate program, established in 1978 at Fort Meade Maryland, which investigated the potential for psychic phenomena in military and domestic intelligence applications, specifically, the “remote viewing” phenomenon, also known as “astral projection”.

In his book, ‘The Yoga of Time Travel’, bestselling author and physicist, Dr. Fred Alan Wolf proposed to explain the superhuman abilities of omniscience, telekinesis, levitation and manifesting objects out of thin air, which have for millennia been reported of “fully-realized” Hindu yogis after years of practice in seeking to become “one” with Brahman/Atman (“God”).

Today, you are being invited to explore your inner-space.  Look into yourself and see what you love to embrace it.  See what it is you feel you need to change.  See yourself as The Universe sees you…perfect, whole and beautiful.  It may take some work for your conscious mind to realize the gift but, it can be done.  You are loved beyond measure! ~ Creator 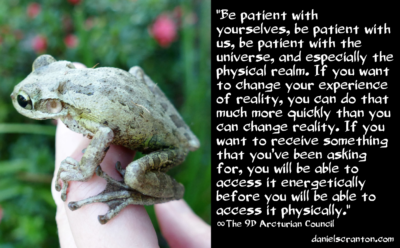 We are beginning to process the numerous requests that have come in recently, and we need to process them because we need to understand what it is that humanity truly needs. What you ask for and what you need are not always one and the same.

You look for the fastest way, oftentimes, rather than allowing for something to come in the appropriate timing. Or you just want to get your hands on a whole lot of money all at once, rather than having the experience of taking in what you need, spending it, and then receiving more.

So what we seek to impart to you is the wisdom that will help you to navigate through the challenges that you face, and at the end of that experience of facing the challenge, we want you to experience the growth as well. So what we give you may not always be exactly what you are asking for, but we will always support you in getting to wehre you ultimately want to go.

When you can be at peace with the process and the unfolding, that means you have mastered the physical reality. Mastery over the physical reality doesn’t come because you have figured out how to instantly manifest what you desire. Mastery comes when you are so certain that what you desire is on its way to you that you bask in the present moment and in the energy that you do have access to.

The heart is our most important and most active muscle. In addition to the benefits for the heart of having a healthy active lifestyle and eating a healthy diets, there are several key herbs, minerals vitamins and other nutritional items which can provide great boosts for heart health. Here are 12 of the best: 1.…..Read more

The amount of debt in the world has expanded hugely since 2007, when financial institutions started failing. They failed because they had too much debt. Now, there’s even more debt. There’s far more debt in all sectors, including the automobile, student loan, mortgage, and consumer sectors, not to mention government debt.

But there is also more corporate debt. Corporations have borrowed extensively, not to build new factories, but to buy back their stocks. Why? Quite simply, to make management stock options more valuable.

The whole situation is worse, and the timing is far more on the edge, than it was back in 2008. Interestingly, the Federal Reserve is now trying to reel in all the money that it created at the height of the crisis, trying to normalise things. They’re trying to both raise interest rates and reduce the money supply simultaneously, while the government is also running a trillion-dollar deficit. This cannot end well.