It is wonderful and perfect to stand in and voice your truth.  However, if you allow your truth to override the truth of another, you are ignoring one of the reasons you are here. (Smiling) I can hear you asking, “What is the difference?”  One has healthy boundaries, hears and understands those around them while the other is deaf to anything but themselves decrying all else as ‘wrong’.  As this monumental shift continues, please remember that even though another’s truth may not align with yours, is it no less valid that your own.  Keep an open mind and heart…when you truly embrace this, anything is possible! ~ Creator 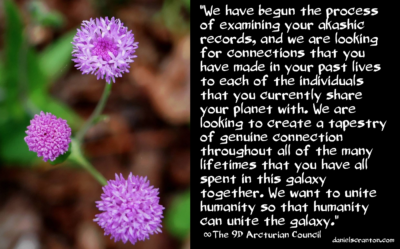 You Have Loved Everyone ∞The 9th Dimensional Arcturian Council

We have begun the process of examining your akashic records, and we are looking for connections that you have made in your past lives to each of the individuals that you currently share your planet with. We are looking to create a tapestry of genuine connection throughout all of the many lifetimes that you have all spent in this galaxy together. We want to unite humanity so that humanity can unite the galaxy.

And the way we are looking to achieve this is by sending a transmission that will include every single one of those connections, every single moment where you will have looked at one of your fellow humans and felt the vibration of love within you. We are eager to complete this little project of ours and to transmit that energy to all of you.

We are eager to awaken within you the knowing that everyone on planet Earth, even those who are sworn enemies have at one time or another loved each other. You have all done so. You have all felt love within you at one time in your very long history for every other person that is on planet Earth right now. We know this already, and we are going to come up with the perfect transmission of energy to remind you.

When you are reminded of the truth that you are love, nothing else matters. Nothing that someone else has ever done or said or been can compare to the truth of who you all really are. We are just going to offer that reminder and then see what happens. We have so much faith in all of you that we know what the effect will be, but we are still eager to see it all playing out and to see you all feeling it once again.

Vic Bishop, Staff Writer Waking Times Some things in our world are so terrible that no one wants to talk about them, much less try to do anything about them. Nearing the top of this list is international child trafficking, and shockingly, millions of children are sold into slavery each year, with many of them being…Read more & videos: “Tony Robbins Supports Operation Underground Railroad” and “Tony Robbins Interviews Tim Ballard”

You can support Operation Underground Railroad also by donating funds and spreading the word. Click here to join the fight.

Mass protests, I have come to realize, are very complicated phenomena. They can give rise to a wide swath of interpretations about their purpose and legitimacy. Their initial thrust seems to be fueled by a deep discontent, a reasonable grievance about unjustifiably oppressive activities or policies on the part of the authority. The way in which protests are…Read more & videos

via Breaking: Watch French Police Officers Remove Their Helmets In Solidarity With The People — Collective Evolution

George H.W. Bush is dead at the age of 94 and the mainstream media mockingbirds spent all day Saturday singing the praises of this “great man” and 41st President of the United States. But it may surprise some to learn the truth about H.W. and the Bush family. This is the story the mainstream media refuses to share with Americans.

December 4th, 2018 By Sayer Ji Contributing writer for Wake Up World Cannabis contains a compound that may kill brain cancers that chemotherapy and radiation can’t touch, so why isn’t it being used today? In recent years, we’ve focused heavily on educating our readers about the still relatively unknown role that cancer stem cells play in cancer, both in…..Read more & Video: “The Power of RAW cannabis”

via If Cannabis Can Kill “Incurable” Brain Cancer, Why Is It Criminalized? — Wake Up World

Dr. Asseem Malhotra is known as one of the most influential cardiologists in Britain and a world-leading expert in the prevention, diagnosis and treatment of heart disease. Currently, he is leading a huge campaign against excess sugar consumption. What also makes him unique is something he recently admitted took him decades to figure out: that our entire medical system, one of the main ‘protectors’ of the human race, is completely corrupt. He now believes that medical education is a state of “complete system failure,” causing “an epidemic of misinformed doctors.”  He also stated that honest doctors can no longer practice honest medicine, and that there is also a growing epidemic of patients who are being harmed…..

Pardon me while I get a little nauseated this week listening to kudos about former President H.W. Bush. Among his many other crimes after World War II, Bush helped organize the CIA that then immediately imported Nazi Mind Control criminal experts into the US, Canada and Australia to do abusive human experimentation on unsuspecting victims, plus torture and kill thousands of children. All was set up for the purpose of so-called “national security” yet worked under the guise of a secret mind control program paid for out of US taxpayer dollars.

Since the 1600s our global monetary system has been under control of Bush’s fellow Satan-worshipping Global Elites: the Vatican, British Monarchy and private families such as the Rothschilds, Rockefellers, Clintons and Bushes.

Rumor was that criminal activities of these Deep State Players was so heinous that their ongoing abuse and torture of children would not be made public, even with the unsealing of 63,233 federal indictments. I take great exception to hiding that truth. Evil exists in secrecy and darkness, while public exposure of the truth would certainly bring more of these child torturing criminals to justice and thus save innocent children from having to live lives while being subjected to ongoing torture.

Many kudos would be worth giving to Kevin Annett and the ITCCS (www.itccs.org email: itccsoffice@gmail.com) for their ongoing investigations in cooperation with the International Common Law Court of Justice in Brussels. They have successfully indicted members of the CIA/Vatican-run Satanic Ninth Circle Child Sacrifice Cult’s international Child Kidnapping, Gun and Drug Trafficking Ring. Ninth Circle activities were enforced by various mafias and funded by US Taxpayer dollars illegally funneled into the global monetary accounts.

Below find just a snippet of what has been revealed to date – news that was unlikely to make the Mainstream Media, the Powers That Be of which were suspected to be involved in Ninth Circle Satanic activities:

Articles on the Satanic Ninth Circle Child Sacrifice Cult kidnapping, drug and gun running ring out of the CIA and Vatican in connection with various mafias: http://beforeitsnews.com/contributor/pages/243/590/stories.html

CIA-Vatican Control of the Global Monetary System Through Child Exploitation

Child Sacrifices, George Soros and 63,233 Federal Indictments About to be Served

Pedophile Network Coverup Goes all the Way to the Top:
http://www.rumormillnews.com/cgi-bin/forum.cgi?read=112295

Kidnapping, Satanic Ritual Abuse and Murder of Children by the Cabal:

Twenty Two Faces is the Biography of Jenny Hill, who as a six year-old, witnessed a human sacrifice while being tortured into multiplicity by head of the CIA Mind Control program, MKULTRA: http://www.youtube.com/watch?v=F626Lsrdwg4

You may have heard of breakaway civilizations, the Secret Space Programs, or the “20 and Back.” Tony Rodrigues joins us in a new weekly series where we will speak with whistleblowers who claim to have worked in various aspects of the SSP.