President Trump appeared to be preparing to declare a National Emergency in order to announce the NESARA Law, later known as GESARA – a freedom from debt order passed by the Supreme Court and signed by the then President Clinton that has never been implemented. Evidently Militia in all 50 states have been put on alert as of Jan. 23.

GESARA proved that since the 1800s the US monetary system was completely under control of bankers and certain global elites including US Presidents. They stole all US Taxpayer monies and funneled them through their privately owned Federal Reserve, IRS, Queens Bank of England, Vatican Bank and Central Banks across the globe. US government employees were only paid after the government borrowed on their own monies – the main reason for the national debt. 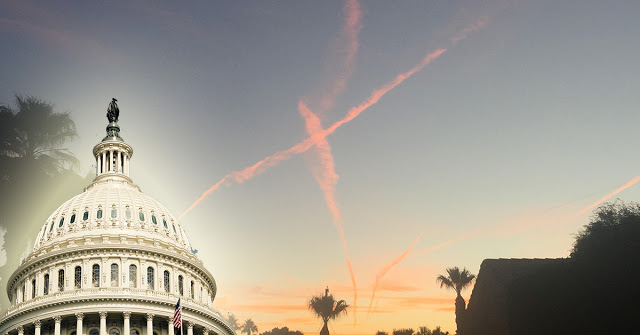 Earth’s climate is changing at an unprecedented rate. With each passing year, there are increasing occurrences of record-breaking temperatures, species going extinct, and volatile weather patterns.

Instead of addressing the root cause of climate change, government agencies have implemented secretive large-scale geoengineering projects in an effort to deliberately modify the Earth’s climatic system.

Around 10 years ago, the concept of geoengineering was viewed as nothing more than a conspiracy theory. But today, the evidence and harmful effect of geoengineering has brought the reality of these government programs into the public spotlight.

Declassified government documents dating all the way back to 1978 reveal that geoengineering is much more than a conspiracy theory. These documents exposed the existence of several Federally funded research programs and committees dedicated to weather modification.

There is also evidence that geoengineering efforts still continue to this day. In 2014, a CBS news crew interviewed physicist Dr. Michio Kaku. In the interview, Dr. Kaku revealed that scientists were conducting large-scale weather modification experiments that involved shooting lasers and nanoparticles into the sky.

Spraying Toxins into the Air

Trapped in a hoax: survivors of conspiracy theories speak out –https://bit.ly/2FYS66D