On occasion, you will see and hear things that will trigger you.  Your body may react in unexpected ways, your brain may go into overload in an attempt to deal with it.  This is a very good time to take a step back and take a breath…or two!  Allow your brain to move from its learned response to a softer, more understanding space.  When you consciously recognize triggers for what they are, you will be better able to understand the ‘whys’ and let go.  Be thankful for yet another learning experience that will help you move further forward than you have ever been before. ~ Creator 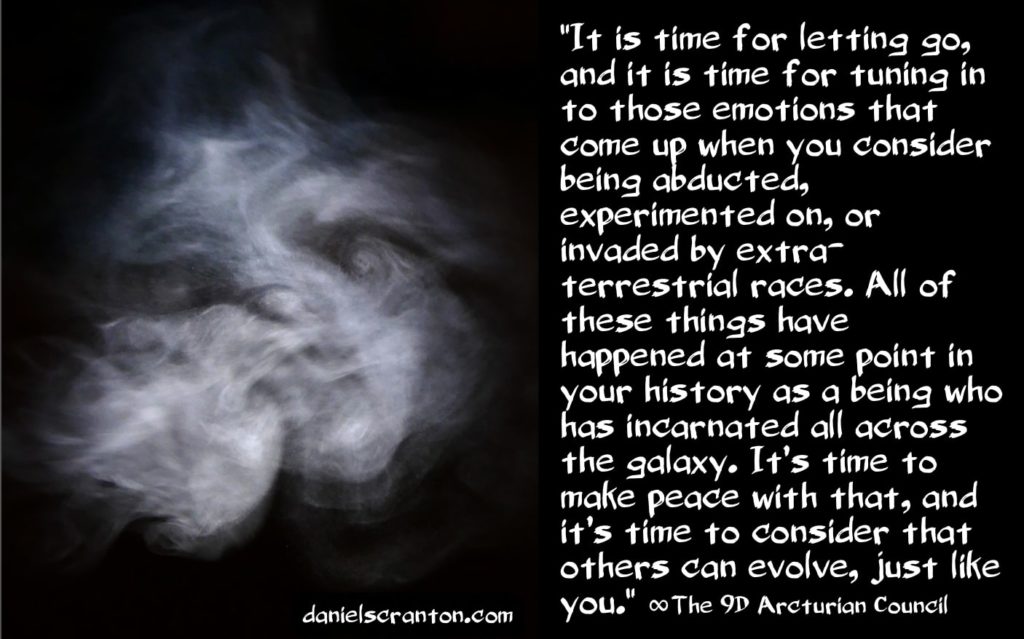 THE E.T.S ARE EVOLVING WITH YOU ∞THE 9D ARCTURIAN COUNCIL

We have begun to investigate the different agendas that exist in the current moment amongst the extra-terrestrials who are keeping a close eye on humanity. We know that most of you are aware that there are well-intentioned e.t.s and there are malevolent ones, and we also want you to recognize that as you evolve, so do they.

They are not the same e.t.s that they once were, no matter whom we are referring to with that statement. Therefore, it is time for humanity to start looking at your own fears and prejudices when it comes to your brothers and sisters from other parts of the galaxy. You will need to come to terms with experiences that you have had in this lifetime and in past lives as you awaken those memories.

The memories we are referring to here are the ones involving e.t.s who have either knowingly done you harm or unintentionally have created trauma within you. Remember of course that everything is happening by co-creation and that you would only create an experience that would trigger fear within you because you needed to have that experience.

So it is time for letting go, and it is time for tuning in to those emotions that come up when you consider being abducted, experimented on, or invaded by extra-terrestrial races. All of these things have happened at some point in your history as a being who has incarnated all across the galaxy. It’s time to make peace with that, and it’s time to consider that others can evolve, just like you.

Now you are still going to need to use your discernment, but that discernment needs to come from your feelings and not from the facts that you have compiled. So prepare yourselves for much more contact, and do it now, before the ships start landing and you have to face those fears all at once. This method that we are proposing is going to make everything easier on you as you shift and ascend.

3D printers work by laboriously printing objects layer by layer. For larger objects, that process can take hours or even days.

But now scientists at the University of California, Berkeley have found a shortcut: a printer that can fabricate objects in one shot using light – and which could, potentially, revolutionize rapid manufacturing technology.

The research, published in the journal Science yesterday, describes a printer the researchers nicknamed “the replicator” in a nod to Star Trek.

It works more like a computed tomography (CT) scan than a conventional 3D printer.

It builds a 3D image by scanning an object from multiple angles, then projects it into a tube of synthetic resin that solidifies when exposed to certain intensities of light.

In two minutes, for instance, the team was able to fabricate a tiny figurine of Auguste Rodin’s famous “The Thinker” statue.

The replicator might have groundbreaking implications, but it does have some inherent limitations as well: the objects it produces are small, and require special synthetic resin to produce.

But it’s an exciting new technology – and one that could lead to a Star Trekfuture.

This article was originally published by Futurism. Read the original article.

Trump just made it official promises exciting announcement at state of the union. President Trump will deliver the State of the Union address on February 5, likely 10 days before the government shuts down once again.

Trump is telling Americans to listen to his speech very closely. Because he has an exciting announcement we’ll all want to hear.

Days before a State of the Union address in which he’s expected to stress unity, President Trump said House Speaker Nancy Pelosi is very bad for the country.

(NaturalHealth365) Overweight and obesity are not unusual phenomenons within the Western world.  For example, in the United States, you’re actually MORE likely to meet a person carrying around extra body fat than not, with about 75% of adult males, 60% of adult females, and 30% of children falling into the overweight or obese category.

These figures are shocking, to say the least. But perhaps what’s more shocking is recent research published by the American Academy of Neurology. A team of researchers discovered something extremely unusual in people with greater amounts of abdominal fat…

Their brains were actually smaller……Read more

(Natural News) Antibiotics have been heavily scrutinized for killing off the “good bacteria” that live in your gut, but it turns out bacteria aren’t the only thing antibiotics can kill. Now, recent research has found there is an even more alarming risk that comes with taking these allegedly innocuous drugs: They stop the growth of new brain cells.

Scientists say that antibiotics strong enough to kill gut bacteria are also potent enough to disrupt the development of new brain cells in the hippocampus region of the brain…..Read more

via Antibiotics may STOP the growth of new brain cells, concludes study — NaturalNews.com