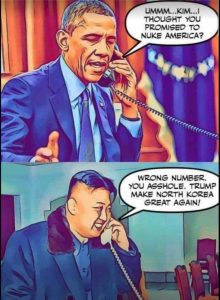 President Trump said he “walked away” from signing a deal on denuclearizing the Korean Peninsula. He said he would rather have “no deal than a bad deal.” He did get a commitment from North Korea to not test nukes and not do any further missile testing. No timeline was given for new talks….Read more video: “Greg Hunter Weekly News Wrap-Up 3.1.19” (32:29)