(The Tree of the Golden Light)  As we rapidly approach the New Year the pressure is building up on the authorities to officially announce the presence of ET’s on Earth who have bases underground. They have been in existence for many years and their spacecraft have been regularly seen in your skies. First Contact was made in the late 1940’s, when by agreement ET’s were allowed to have an undisturbed underground presence on Earth. There have been so many sightings over the years and many, many contacts been made with us. It can no longer be claimed that the ET presence is kept secret so as not to frighten or upset the people, as the whole subject has been aired so many times that most people are prepared to accept that ET’s present no danger to them. In fact they try to keep out of the public view although that is not entirely possible. It can be confusing, as your own military forces have long had their own craft that are not easily distinguishable from any others. However, the triangular craft are more likely to be your own and are regularly seen in your sky. →

Read more via The Tree of the Golden Light 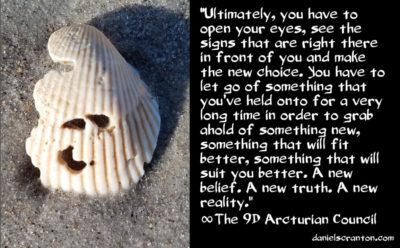 Pay Attention to the Signs ∞The 9D Arcturian Council, Channeled by Daniel Scranton

We are very familiar with the different ways you all have of releasing your thoughts and beliefs about something that you once held to be very true for you. We know that in some cases, it only takes a slight nudge to get you to move away from a once strongly-held position, and we know that other times it takes something miraculous to occur in order to shift your perspective to something brand new. →

(ExoPolitics)  On December 7, attendees at the Reagan National Defense Forum held at the Reagan Presidential Library were told by the Secretary of the Air Force, Barbara Barrett, and US Congressman Mike Rogers, that they are in favor of declassifying information about the Air Force’s secret space program in order to get the public to support a US Space Force. Their comments confirm that the US Air Force is on the verge of disclosing the truth behind rumors of a secret space program and that the Space Force is a vital part of a series of stunning disclosures that lie ahead. →

(CropCirclesLucyPringle)  One of the most magical times of year is fast approaching – the Winter Solstice, the shortest day of the year. Celebrated all over the world, this is the moment when the rhythm of the earth changes and the heartbeat of Gaia, the mother Goddess takes on a new charge of energy. We are told that she is a goddess who, by all accounts, inhabits the planet, offering life and nourishment to all her children. In the ancient civilizations, she was revered as mother, nurturer and giver of life. And in Greek Mythology she represented the Earth, birthing all forms of landscape, plant and creature. Though her creation was majestic, her solitude was great. She longed for love and created the sky with whom she mated, igniting a creative force which birthed countless offspring: Time and the Fates, the Muses and the oceans, to name a few. She’s considered the primeval mother of whom all gods – and life itself – descended. As the mother figure she represents the Divine Feminine. →

Now is the time to listen, dear one!  You are being given some very pertinent details about upcoming shifts/changes and it is imperative that you take in as much as you can.  In response to that information is it vital for you to fully understand what The Universe, Earth, society and your body is telling you.  Worry or anxiety does not have a home in this process. You have the skills and knowledge to understand and take action in ways that you have never explored before.  Trust The Universe…trust the process…and trust yourself.  You can do this! ~ Creator

(Public Intelligence Blog)  The Rothschilds Murdered at least Seven US Presidents The House of Rothschild recognized that sovereign governments printing interest-free and debt-free paper money would break their power. Phi Beta Iota: We have no direct knowledge. We do believe that the US Secret Service and the FBI and NSA are not doing their jobs…→