Expectations are heady, powerful things. Their scattering energy takes the truth and bends it toward an alternate reality where feelings are hurt, disappointment is the order of the day and emotions ride crazy highs and lows. One of the best things you will do as a human is to release expectations held for and by you and refocus that energy toward the Universal Gift of Love. ~ Creator 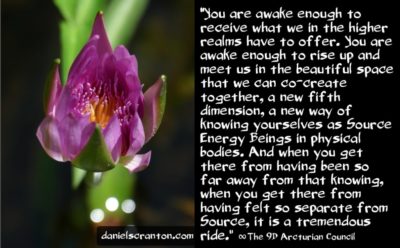 We are quite famous throughout the galaxy for our spirituality here in the Arcturian star system. We have been through so many different processes, teachings, exercises, meditations, and different ways of knowing ourselves as Source Energy Beings in physical bodies, and that is essentially what you all are there to discover. You are there to discover how to be Source Energy in a physical body, how to represent Source in the physical. You are there to know yourselves as gods in the flesh. →

Opening your eyes
You are amazed
By the abundance

That is now
Being revealed to
You by Source

The infinite field
Of all wishes
Fulfilled before you

Magically more than
You ever imagined

If man understood that “what I create has nothing to do with what anybody else is creating” then he wouldn’t be so afraid of what others are doing.

There is also a purpose to these experiences; they aren’t simply to trip out (although if you wish to do that it’s up to you). These experiences can help you dissolve fears, move past trauma, expand your consciousness and much more. I personally don’t feel inspired to do anything other than explore and expand myself when I engage in experiences like this. →

(Wake Up World)  Even while the world’s attention is on the Covid-19 pandemic, the Cancer pandemic continues to rage across the world, claiming countless lives and causing immense suffering. Yet all the while, new research emerges about the power of natural foods and natural therapies to prevent Cancer and to treat it.

A ground-breaking new docuseries gathers expertise from more than 70 doctors, researchers and cancer survivors, creating powerful testimony and vital information you need in order to keep yourself and your loved ones safe. Best of all, you can sign up here to watch the series FREE of charge.

When you sign up, you’ll also receive an incredible FREE report: →

Read more via The Answer to Cancer: FREE 9-Part Docuseries and Report — Wake Up World Chef Pete Evans is an internally renowned chef and has been the co-host and judge of Australia’s number 1 television show, My Kitchen Rules for 11 seasons. Chef Pete discusses the pandemic and how most of what we are hearing might not be the truth. Chef Pete talks about vaccines on how they might harm your body and how food and a healthy living is more important to protect you from sickness and disease. Chef Pete says there is an awakening happening and that the [DS] is preparing their next move if they do not get their way, but countermeasures are in place to stop this.

Have you ever pondered the fact that the current COVID lockdown, masks, and fear may be a result of official “facts” that are not facts at all but are, well, actually lies?

In our opinion, the propaganda campaign surrounding this so-called “pandemic” has achieved its goal. Inundated with voluminous amounts of contradictory information coming from all angles, people in general have succumbed to “analysis paralysis,” confusion and fear. →