Why Your Ascension Symptoms are Acting Up ∞The 9D Arcturian Council, Channeled by Daniel Scranton

We are very happy with the way that you all are progressing there on Earth, especially in regards to the energies that are upon you right now and the challenges that you’ve been facing. We see you all making progress vibrationally, and while it takes some time for that vibrational progress to show itself to you in the physical realm, please trust us when we say that you are moving forward on a timeline that is in service to all. You are getting to where you need to go because of the intensity of the times you are living in. You have taken yourselves through a rapid energetic detox of sorts, and when you are going through a detox, you do tend to have a lot of symptoms. You do tend to feel worse than you normally feel for a while, but you feel worse because of what has been released, what has been dislodged and is in the process of being expelled from the body.

Read more: Why Your Ascension Symptoms are Acting Up ∞The 9D Arcturian Council — Daniel Scranton’s Channeling

When you are considering what it is that you can contribute to the human race, do not underestimate the value of putting your faith in humankind. Do not underestimate the value in seeing the best in your fellow humans. Look for the best in your fellow humans, and tell them what you see. Be honest, but also be focused on where you see your friends, co-workers, relatives, and neighbors thriving.

Let everyone off the hook for they have done or said or believed that you found to be objectionable in the past, and make room for the possibility that these people around you are also ascending and evolving. They are opening their minds and their hearts. They are letting in that light and love from the higher realms, even if they are unaware of the fact that they are doing so. They are affected by your good thoughts about them.

So when you find yourself shaking your head and thinking, ‘How could that person do that or believe that?’ just remember that you have the opportunity in that moment to be a part of the solution. You have the opportunity to look past that person’s words or actions and to see right into their heart. If you tune yourself to the vibration of love, then you can feel the love that is at the heart of every human being.

You can do this, and we recommend that you do because we know that all of you want to feel like you are contributing more, like you are being of service, but you don’t often know how to go about that. It’s not about your words and actions in that arena of service either. The best thing that you can do for your fellow humans is to see the good in them, see the love in them, see Source Energy in human form, standing in front of you, doing the best that they can. 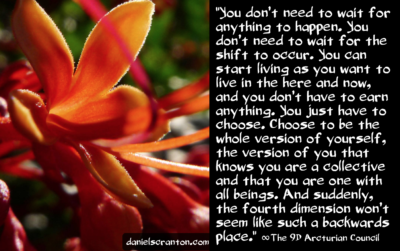 We have awakened within you a sense of who you have been, and we have simultaneously awakened a sense that you have of where you are going. You are going to be where we are, someday, and we know that many of you would like to jump right to the ninth dimension. But we also know that you would be missing out on so much fun if you did. The joy of the journey is not only possible. It is highly likely from this point forward.

Now that you are awakened and ascending, you must realize that everything can only get better from where you are. Everything is expanding, raising its vibration, and becoming less polarized. So as you ascend from one dimension to the next, you don’t experience the same degree of polarity. You don’t experience the same intensity that you have there on Earth, in the third and fourth dimensions.

We invite you to feel for the unification of our energy. Because we know ourselves as a collective, there is no fragmentation and there is no separation. What you really want to do is to feel that within yourselves now. You don’t need to skip dimensions in order to get to the place of feeling unified. You can defragment yourselves and let go of the idea of separation between you and any other on the planet. And in so doing, you will minimize the polarity that you experience right away.

You don’t need to wait for anything to happen. You don’t need to wait for the shift to occur. You can start living as you want to live in the here and now, and you don’t have to earn anything. You just have to choose. Choose to be the whole version of yourself, the version of you that knows you are a collective and that you are one with all beings. And suddenly, the fourth dimension won’t seem like such a backwards place.

That is your journey. That is what you all came to do, and there’s no need for you to wait even a moment longer.

You chose to have the experience of being an awakened individual who was in the midst of an ascension journey. Now, how does that differ from lifetimes where you were raised in a religious family? And you believed that you would someday go to heaven.

You were also told in those lifetimes that you were in control of your own destiny. All you had to do was follow these rules, worship this being, ask for forgiveness, or some other combination of things, and poof! You would arrive in heaven upon your death. What’s the difference?

And hopefully you recognize that you help others not by getting them to believe what you believe, but by helping them feel what they need to feel. Everyone who is on planet Earth at this time came for a feeling journey. You all came because you wanted to experience what this would feel like. It’s also a challenge, and you all like challenges.

You also realize that one of the keys to making all of this work is a lack of judgment. That means you don’t judge yourselves and you don’t judge others. And as Source Energy Beings, you know that there’s no one and nothing outside of you to place that judgment upon you. You know that your ascension is a choice, and we know that you have made a very good choice in being awakened while you ascend.

Now is the time for those of you who are awakened to fully integrate the versions of yourselves from past lives who have lived in the fifth dimension. Many of you believe that you began your incarnational cycle in one of the lower dimensions and are now ascending, but you came down dimensionally from Source before you began the ascension process.

Just because there has never been a fifth-dimensional version of humanity on planet Earth, does not mean that you haven’t been able to incarnate in other parts of the galaxy as fifth dimensional beings. You have, and you are downloading the information, abilities, and wisdom from those lifetimes. You are integrating those aspects of who you are into your now moment because it is relevant to what you are doing as ascending beings.

This integration process will be pleasant in comparison to some of the past lives that you’ve integrated from planet Earth and the third dimension. Now that you are aware of this process, you can expect to be more tuned in to the fifth-dimensional energies around you, and you can expect to have an easier time in your ascension process.

We also recommend that you welcome these aspects of who you are and who you have been into your hearts. They will give you a sense of wholeness. You will feel more complete, and you will have a better understanding of what you are moving into as you cross over from the third dimension to the fifth dimension.

As much as these beings have to offer you, nothing will fully prepare you for the experience, because this experiencing of shifting upwards is so new and wonderful. And we are very proud to be a part of this experience with you.