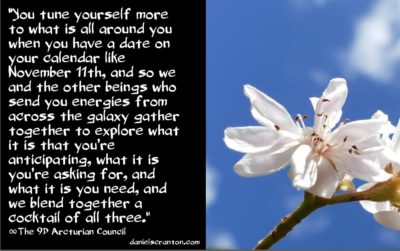 THE 11/11 ENERGIES ∞THE 9D ARCTURIAN COUNCIL, CHANNELED BY DANIEL SCRANTON

We have been witnessing the way in which you are all handling the energies that are upon you now, as you open yourselves up more because of the date on the calendar. And we are very pleased to see so many of you in a place of relaxation, embracing your Divine Feminine energy, and letting in that which you have been summoning. The energies of the time that you are in right now are a reflection of your state of being as an awakened collective. →

Dear Children, I Isis, come forth in this hour for I delight in the rise of the Divine Feminine Energy once more! Like a Phoenix rising from the Ashes The Feminine has reclaimed her right to speak to the hearts…Read more

In connecting with my Higher Self and my Main Guide Heru and my Spirit Guide Team I have the following message…. I come forth this day to bring you into a greater awareness of the Cosmic Shifts that are unfolding….Read more

From my heart to yours –  Therese Zumi

As a direct result of actresses in Hollywood openly admitting that they were victims of Harvey Weinstein’s sexually abusive behaviours Sweden is now experiencing an avalanche of effects which grows by the hour. Thousands upon thousands of women are telling about their experiences of being sexually abused by men under the # Me Too! Many women are telling of experiences that they have never dared to share with anyone before.

This has so far, within only a few days resulted in 2 journalists being fired. One from a main newspaper and one from Sweden’s main official TV channel. Another well-known and liked TV personality has also been fired from another channel having been exposed as being derogatory to women using sexist comments and unwanted sexual invitations on several occasions. Not only has this person been fired but all his popular TV shows have been shut down immediately and planned recordings of new shows have been cancelled. Everyone is now talking about this and lively discussions are taking place in the media asking men to come forward now and discuss with men of every age how women should be treated starting at a very early age. This last week has focused on these types of male dominance and sexist behaviours in the area of media, TV, newspapers and so forth, this week it would seem that it’s time for this discussion in the sports world. In fact, it seems as if these discussions will now take place in every area of people’s lives. It will! Nothing can stop this now everyone has had ‘enough’…..

OCTOBER 22 2017 Dear ones, once again we come to discuss the many facets of truth taking form at this time. Each day more are awakening into higher levels of awareness. Many who previously held only a passing interest in…Read more

via The Arcturians via Marilyn Raffaele, October 22nd, 2017 — Sananda

Unity Meditation videos have been created in many languages. Make them viral, spread them through your networks to assist in reaching the critical mass! We need translations in additional languages. Please send the text of your translations to parlagisas777@gmail.com and videos will be created in your language and posted here.

via Unity Meditation Videos — The Portal