There has been a consortium of beings contacting us lately from 13th dimensional beings on down. Most contacts are with the 7D, 6D, and 5D beings. Pleiadians, Orion Council of Light, Arcturians, Andromedans and Sirians. They are deeply concerned with the direction of Humanity and the Earth and are now activating the ground crew, those who incarnated for these times. It is said for these times, God/Creator/ Great Spirit has given its best. This process is also extremely agitating the lower realms, those in the lower 4D and those in 3D who have aligned with the darker forces. The draconian or archon grid is dismantling. It is the grid of tyranny, self-serving narcissists who lust for power, wealth and longevity at any expense. Whatever is out of alignment with Universal Law will be transformed or dismantled altogether. This is not wishful thinking this was written about in Becoming Gods as far back as 1982. The escalation of solar flares, erratic weather, increase in earthquake and volcanic activity along with the upcoming pole shift and the rise and fall of the tyrants has been documented. The fall of the tyrants is here. The Beautiful Many Masters, Saints and Sages, Galactic Federation, the white hats, Qanon are real. The Creator God of this Universe has said, “It is finished”. One only has to monitor the electromagnetic light spectrum if they need proof. Our solar system is moving into a highly energized place in space, it is a natural cycle. We have to rise to the occasion.

Q Anon has given us a great deal of timely and accurate hints and information on what’s happening at the highest levels of government. He’s asked that this message get widespread circulation.

I’m led to believe that he’s an approved leaker (or leakers) from inside the White House.

I highly recommend following Q Anon’s “breadcrumbs” on Twitter, where he makes fairly-regular “drops” if you want to follow closely the rapid unfoldment of this Accountability phase of Ascension. (1) 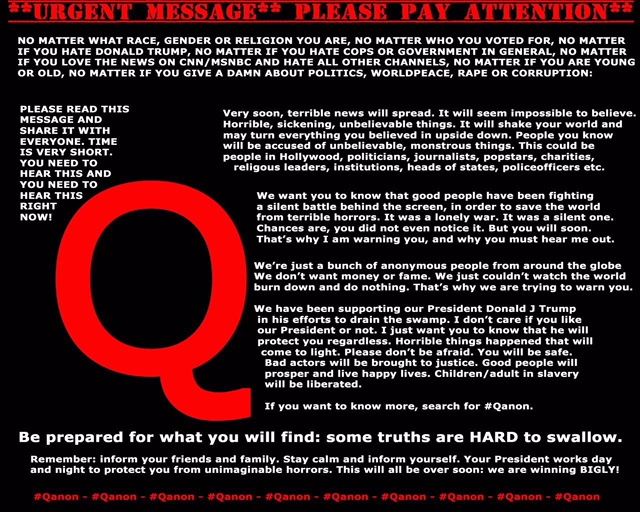 Here is a typical Twitter message from Q Anon:

I was talking with a colleague yesterday who didn’t know what was going on so here is a brief “replay” for anyone else who’s somehow unaware.

On Dec. 21, 2017, President Donald Trump, by Executive Order, declared a national state of emergency against human-rights abusers and stated that their funds would be confiscated as would be the funds of everyone who collaborated with them.  (3)

In one stroke of the pen, he changed the prevailing meme from being against terrorists and for national security to being against human-rights abuses and for human rights. Close the book on the phony war on terror.

Approaching 10,000 sealed indictments have been registered in the United States as part of the takedown of the cabal. (4)

Guantanamo Bay is being prepared to receive high-profile detainees. (5) High-ranking politicians like Hillary Clinton and John McCain are allegedly wearing orthopedic boots to hide ankle monitors. (6) Forty Representatives and Senators have stated they are not standing for re-election. (7) Two-hundred CEOs from well-known firms are rumored to have resigned or retired.  (8)

The cases against all of them have been worked upon by special counsellors and prosecutors from Patrick Fitzgerald to Robert Mueller. They’ve been put together consistent with human and universal law. The defendants will receive fair treatment and a sentence aimed at rehabilitation rather than punishment.

The takedown of the cabal is happening quickly. Those that attempt to flee on airplanes are seeing their airplanes turned back.

One thousand marines flew down to Guantanamo to man the base. Gen. Jim Mattis went down Dec. 21, the same day the President posted his EO. (9) It’s estimated that more than 44,000 troops worldwide are participating in taking down the cabal. (10)

The takedown is hoped to be rapid and conclusive. It’s being conducted in secrecy but approved leakers like Q Anon are keeping us (often cryptically) informed.

(1) The latest board for his “breadcrumbs is 8chan:  https://8ch.net/greatawakening/index.html

(2) However the claim that Obama is being blackmailed could in the end prove to have relevance. I don’t know.

The Internet has changed everything,
and there’s nothing the C.I.A. can do about it.

From this point forward, dismantling the shadow government is really only a matter of execution.

“TPTB made a HUGE mistake when they built the Internet for themselves
and their misguided purposes.  They conceived it as the ultimate weapon
of mass deception, and means to completely control the planetary realm…
and so it is.  However, they did not realize the extent to which it could, and
would, be used against them.  Google “Rothschild” and see how their name
is now associated with every foul endeavor under the sun, both past and
present.  Ditto that for Rockefeller…Bush…Clinton…Obama…Soros…
Kissinger, etc.  Just this reversal of fortune alone has majorly taken the
wind out of the sails of their New World Order agenda.  The “genie is out
of the bottle”, and there ain’t no putting it back in!  And that genie is coming
right for ruling elites with the sharp sword of truth and avenging scales of
justice.

With the advent of the World Wide Web in the late 1980s, and especially the Internet in 1995, everything changed.

The entire world became digitally connected so that people everywhere could connect in myriad and diverse ways.

This exceedingly monumental development permitted every human being to have immediate access to the “global information database”.

Once this pivotal milestone was passed, the unparalleled sharing of privileged information and sensitive data began in earnest.

KEY POINT: This single info-sharing dynamic has created unlimited opportunities
for people to disseminate their own radioactive truth(s).  Some of these truths are
capable of bringing down corrupt governments anywhere as well as exposing multi-
century criminal conspiracies perpetrated on a global scale.

When whistleblowers reveal classified information, it creates more transparency, and reveals the true intentions for secrecy under the justification of “national security,” a term that’s basically used now to conceal vast amounts of information. Below is a list of 10 of the most important whistleblowers. Edward Snowden As most of you already know, Edward Snowden, a…….Read more & videos

The Deep State refers to a coordinated effort by career government employees and other individuals to influence state policy without regard for democratically elected leadership. “Democracy is popular because of the illusion of choice and participation it provides, but when you live in a society in which most people’s knowledge of the world extends as far as sports, sitcoms,…Read more & video clips

via David Wilcock Update – Pizzagate, Donald Trump, & Fall of the Cabal — Ascension with Mother Earth and Current State of Affairs

via SGT Report; Putin and Trump could save the World VIDEO, November 16th, 2017 — Sananda

Corey Feldman has been making headlines as he has continued to come forward on a subject he has been passionate about for years: exposing Hollywood pedophilia. Although some are suggesting Corey is doing this for attention, this problem is very real and we’re beginning to see it unravel all over Hollywood. It began recently when Harvey…Read more & videos