When I go in my mind from hot spot to hot spot in the world, I want to weep.

So much suffering! Whatever can we do about it?

Sending love is always the best thing we can do, in my view. But let me leave that subject for now.

I’d like to focus on people falsely imprisoned, moved off their lands and made into refugees, incarcerated and indoctrinated, tortured, sold into sexual slavery, etc. – in other words, people who are being or have been oppressed. →

Read more via An End to the Oppression of all People by Jan. 1, 2021 | Steve Beckow — Voyages of Light

“I think there was spying.”

These words by the Attorney General should send shockwaves through America.

American citizens – and even possibly a political campaign – were spied on, and the only question is whether it was “adequately predicated.” In other words, was proper procedure followed, or was there rampant political bias and Deep State abuse of our legal system? →

(Activist Post)  This week, prosecutors in Brazil filed a criminal complaint against Glenn Greenwald, an internationally lauded journalist best known for publishing leaked documents detailing the NSA’s mass surveillance. Greenwald’s prosecution is an attempt to use computer crime law to silence an investigative reporter who exposed deep-seated government corruption. Sadly, this isn’t the first such effort and, unless we stop this drift to criminalizing journalism, it likely won’t be the last. →

By Justin Deschamps: In a May 30th, 2019 FBI report, the bureau stated that “conspiracy theory-driven domestic extremists” are a growing threat. This comes at the heels of major moves by Big Tech to censor anything it labels “conspiracy theory,” such as anti-abortion videos on YouTube. Given the fact that the Pizzagate and QAnon material has yet to be properly investigated, this move by the FBI is likely an attempt to downplay the significance of government corruption in preparation for the 2020 US presidential race. ➤➤

“As political and economic freedom diminishes, sexual freedom tends compensating to increase. And the dictator (unless he needs cannon fodder and families with which to colonize empty or conquered territories) will do well to encourage that freedom.”—Aldous Huxley, Brave New World

Anyone who believes differently hasn’t been paying attention.

Politics, religion, sports, government, entertainment, business, armed forces: it doesn’t matter what arena you’re talking about, they are all riddled with the kind of seedy, sleazy, decadent, dodgy, depraved, immoral, corrupt behavior that somehow gets a free pass when it involves the wealthy and powerful elite in America. ➤➤

Read more via The Heart of Darkness: The Sexual Predators Within America’s Power Elite — Era of Light

Q: DEEP STATE DEEP PANIC, TREASON EXPOSED Feb 1 at 11:27 pm Who ever thought the old saying, “May you live in interesting times” was an old Chinese curse. Turns out it is. And we do. But it looks like the deep state is about to be rocked to its very core as President Trump and Congress….Read more & video 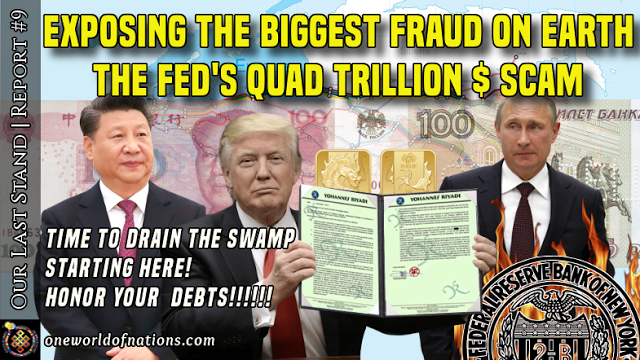 Hello Everyone,Please take time to read this article with supporting documentation exposing one of the biggest frauds on earth perpetrated by the Federal Reserve banking cartel. This is a sanctioned white hat’s report. I was given permission to publish the full article but SCRIBD is blocking me from accessing the supporting documentation. Because of this….Read more