With loving greetings from all souls at this station, this is Matthew. The combination of planetary alignment and ever-rising vibrations strongly indicates that the weeks and months through the end of your year will be extraordinarily active. You could think of it as the storm before the golden dawn.

As rebellion against oppression continues and emerging revelations add shock and confusion to global upheaval, sending love-light energy to all of Earth will have increased importance and beneficial results. You have spiritual strength and conscious awareness to handle bumps along the pathway as the uprooting of dark domination picks up pace, and, to the extent you can, ease the concerns and lighten the burdens of others.

We’ve all heard of sustainability, but is this really what we want? To simply sustain? What about the idea of thriving? That is to say, live in a world that works harmoniously for everything and everyone, and that has the ability to always access our full potentiality. These systems can fluidly expand as our thinking, consciousness, and innovations expand. This, as opposed to today, where rigidity, scientism, ideologies, and economies hold the world back from getting even basic needs.

Read more & (Official Trailer) THRIVE II: This Is What It Takes (3:54) via — Collective Evolution

It starts with the term light. A force that acts as both a spiritual property of consciousness and a waveform.

Light is the essence this universe is created from. It is information in the form of energy on an electromagnetic spectrum dispersed as a myriad of frequencies that take unlimited forms.

As we journey away from our original state as Source consciousness and experiment with our infinite nature, we utilize our ultimate freedom to create, explore, and experience all expressions of our self for better or for worse, through the medium of light. →

http://qmap.live | *READ ALL* Turn On Subtitles AND CHAT HISTORY. To understand the present, we need to understand the past and how we got to where we are today. Thankfully, The Plan in place will make way for change. America was warned decades ago but the warning was ignored. Now we are living in an enslaved system created by the Elites. Who are they? WHY are we fighting so hard right now to right the wrongs of the past? From Dark to Light. This is our destiny. The Calm has Past. The Storm Is Here. Enjoy The Show.

The History of The Illuminati & The CFR, Council On Foreign Relations 1967

This is taken from *my* personal copies of these highly sought after and rare LP’s. This Video Explains the Origins of the C.F.R / Illuminati and will answer a lot of your questions as well as give you new ones.

This 3x LP record-set documents the activities of a secret society known as The Illuminati, and their New World Order.

Mr. Fagan describes with documentary evidence how the ILLUMINATI became the instrument of the House of Rothschild to achieve a “One World Government”.

Mr. Fagan relentlessly uncovered plots for major historical events. Myron Fagan is considered to be the archetype for the PCT (Paranoid Conspiracy Theorist)

This Recording is one of the most interesting and yet horrifying, with factual stories of some of the most sensational plots in the history of the World.

The findings by Mr. Fagan were split into 6 parts, between these 3 records.

Each record has some descriptive notes on the back of each gate-fold.

A small message is also posted in the back of each gate-fold that says:

Eliminate the Illuminati…see that this message is heard!

* Play this for the unaware, uninformed and well meaning people who desire to hear the truth – Don’t waste your time on the hard core socialists who have already repudiated principle.

* Buy Air-time with your club or organization – Get free time! No station is too small!

*Use at coffees – Luncheons – meetings – everywhere and often. We must succeed – Our children’s liberty is at stake – Freedom has no substitute – America no equal!

The Corrupt Fear us. The Honest Support us. The Heroic JOIN us! We believe in non-violent, peaceful civil disobedience. We believe in non-violent, peaceful civil disobedience. Throughout history the world has been controlled by big ideologies such as religion, socialism and capitalism to name but a few. These are all forms of slavery that have stopped our evolution and removed our freedom. ANONYMOUS see these ideologies for what they are, SYSTEMS OF CONTROL. The time for change is now. No longer shall the people be oppressed by corruption.

We are Anonymous. We are “The Qllective”. 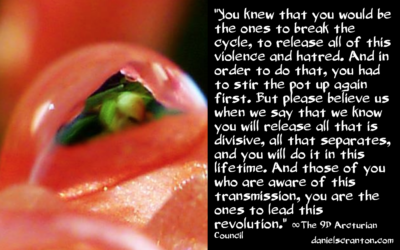 We have noticed a trend upon your planet, and that trend is to look for reasons to not be in harmony with one another. This trend is not something that humanity came up with. You all took it on. Your prejudices, your bigotry, your xenophobia, and so many other habits that you’ve picked up have come from other parts of the galaxy. Earth was always meant to be extraordinarily diverse, especially in comparison to other planets in the galaxy.

And with all of that conflicting energy that you have there on Earth, it was part of your destiny to be at each other’s throats over little things like what country you were born in, or what color skin you have. Something as silly as the way you choose to connect with Source has become a huge polarizing and divisive issue, and it needn’t be. If you think about it, how someone else chooses to make that connection has nothing to do with you.

So there must be a bigger story here, and the bigger story is that you all have long histories in the galaxy. You have had experiences in other star systems where extra-terrestrials have invaded and taken over. You’ve seen planets destroyed over ideologies, and you’ve seen people taking their beliefs to such an extreme that they would participate in a genocide without blinking an eye.

So that’s the history that led up to the Earth experiment, and you all carry these memories in your cells, in your DNA, in the atoms that make up your physical bodies, and of course, whether you remember them or not, they are a part of your consciousness. Therefore, when you see something happening on your planet that makes you feel very depressed about the state of the human collective, please recognize that you took this on as a collective, and you took it on in order to heal it, in order to release it.

You took it on because you knew that you would be the ones to break the cycle, to release all of this violence and hatred. And in order to do that, you had to stir the pot up again first. But please believe us when we say that we know you will release all that is divisive, all that separates, and you will do it in this lifetime. And those of you who are aware of this transmission, you are the ones to lead this revolution.

There is a growing awareness and indignation about the injustice and inequality running rampant in our world, and growing interest in creating the better world that we all know can exist. By Jeff Street, Guest author,HumansAreFree.comOne of the key changes that needs to happen to enable the transformation of our humanity is to reclaim our…Read more

via You Are a Sovereign Being – Start Acting Like One! — Humans Are Free

There are more ideologies now than ever before on the planet, more perspectives, more points of view, and therefore, more truths. What is important for you to recognize is that you will be continually offered new truths as you move forward with your ascension.

You will be asked to decide for yourself what your truth is and how you can live it. It’s not enough just to know your truth and to speak your truth. When you live your truth because it resonates, you are a powerful force. When you allow others to live their truth, even if it differs from your own, then you become more powerful as a collective.

And the truths that resonate with you now may not resonate with you in a year or two. Why would that be if they are truths, you might wonder? You will continue to evolve, and so will this reality. It will evolve with you, creating new rules, new laws, and new ways to experience it. So why would you want to cling to something that could only slow you down?

Edward Snowden, in his most impassioned appearance to date, eviscerated the Surveillance State, saying it isn’t terrorists who steal our rights — it’s government.

via Snowden Smashes the Police State in Most Epic Rant Ever, ‘Terrorists Don’t Take Our Rights, Govt Does’ — The Free Thought Project