Text for Cartoon Below the Fold Along with Links.

Roughly 5,000 individuals, a combination of individuals, partners in the major Wall Street firms including particularly Goldman Sachs, Merrill Lynch, and JPMorgan, and associated lawyers and others engaged in the global ecology of naked short selling and money laundering – both federal crimes – are now subject to discovery and criminal forfeiture of all assets purchased with illicit wealth. → 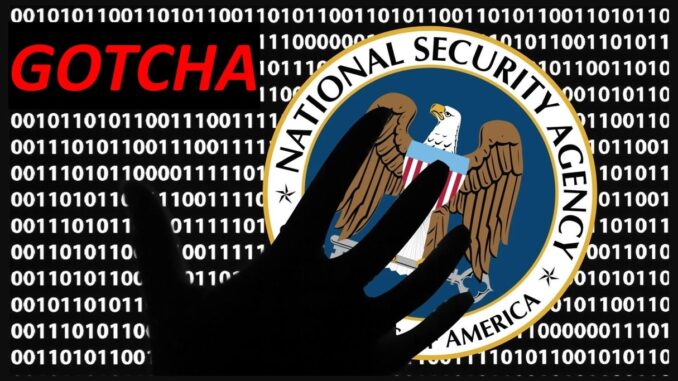 The details of a communication stream regarding an online confession by a sex predator that bragged in an online chat room session about raping and murdering children was tracked by National Security Agency (NSA). →

The National Security Agency Is A Criminal Organization

Years before Edward Snowden provided documented proof that the National Security Agency was really a national insecurity agency as it was violating law and the US Constitution and spying indiscriminately on American citizens, William Binney, who designed and developed the NSA spy program revealed the illegal and unconstitutional spying. Binney turned whistleblower, because NSA was using the program to spy on Americans. As Binney was well known to the US Congress, he did not think he needed any NSA document to make his case. But what he found out was “Congress would never hear me because then they’d lose plausible deniability. That was really their key. They needed to have plausible deniability so they can continue this massive spying program because it gave them power over everybody in the world. Even the members of Congress had power against others [in Congress]; they had power on judges on the Supreme Court, the federal judges, all of them. That’s why they’re so afraid. Everybody’s afraid because all this data that’s about them, the central agencies — the intelligence agencies — they have it. And that’s why Senator Schumer warned President Trump earlier, a few months ago, that he shouldn’t attack the intelligence community because they’ve got six ways to Sunday to come at you. That’s because it’s like J. Edgar Hoover on super steroids. . . . it’s leverage against every member of parliament and every government in the world.”

William Binney is a former high ranking intelligence official with the National Security Agency (NSA). He is one of the highest placed intelligence officials to ever blow the whistle on insider NSA ‘knowings.’ He made headlines when he resigned in 2001 after 9/11, having worked more than thirty years for the agency. He was a…Read more

via 30 Year NSA Employee Turned Whistleblower: ‘The Ultimate Goal of the NSA is Total Population Control’ — Humans Are Free

William Binney is a former high ranking intelligence official with the National Security Agency (NSA). He is one of the highest placed intelligence officials to ever blow the whistle on insider NSA ‘knowings.’ He made headlines when he resigned in 2001 after 9/11, having worked more than thirty years for the agency. He was a…Read more