A police officer was recorded ripping an innocent passenger from a vehicle, causing him to have a seizure and then assaulting and arresting him for no reason.

Egg Harbor Township, NJ — Christopher Kiraly and his friend were on their way to dinner last month when they were harassed, assaulted, and arrested by police, for absolutely no reason. Kiraly, who is a diagnosed epileptic, went into a seizure during the stop and instead of giving him help, two Egg Harbor Township police officers beat and arrested him. The entire rights-violating debacle was captured on Kiraly’s cell phone.

Read more & WATCH: Cops Harass Innocent Epileptic, Making Him Have a Seizure, Then Beat and Arrest Him — The Free Thought Project 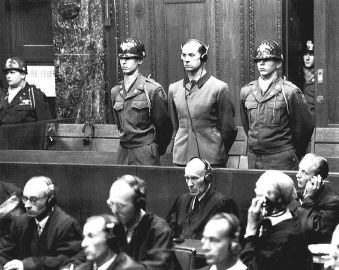 War Crimes Tribunal at Nuremberg. Adolf Hitler’s personal physician, 43-year old Karl Brandt. Brandt was also Reich Commissar for Health and Sanitation, and was indicted by the U.S. prosecution with 22 other Nazi doctors. Brandt was found guilty of participating in and consenting to using concentration camp inmates as guinea pigs in horrible medical experiments, supposedly for the benefit of the armed forces. He was sentenced to death by hanging. Image Source

Note to The Powers-That-Be: Measles is NOT Ebola!

Over the past week, we have been inundated with mainstream media stories about the measles ‘epidemic’ in Washington state where 68 have been infected. Nationwide, there have been 159 cases identified through February 21, 2019. (1)

An outbreak is defined as three or more cases. Of measles — an illness that is self-limited and benign for nearly all who got it. Before I go on, let’s remember how measles was regarded when I was growing up.

Recall that the Brady Bunch became infected with measles. I do not recall newspaper headlines blaring about the Bradys serious illness. I don’t think the health department was on the episode investigating how the Brady’s became ill.

Read more & video: “Measles, Back In The Days Before The Marketing Of The Vaccine” (8:11) via Dr. Brownstein on Mandatory Vaccines: “We Don’t Live in Nazi Germany where Medical Procedures were Done without Consent” — Humans Are Free

For the first time, the FDA has declared CBD beneficial and is asking for the public to weigh in on its effects to decide how to move forward…..Read more