Me: So Ivo what’s this you’re telling me, they’re battling under Washington DC?

Ivo: Yes my love. There is a labyrinth underneath the capital and the U.S. forces are fighting draconian forces in order to overtake the DUMBS.

Me: There are probably a lot of military forces in the white house because that’s where they can get into?

Ivo: They have blocked off the area underneath the White House for access. → 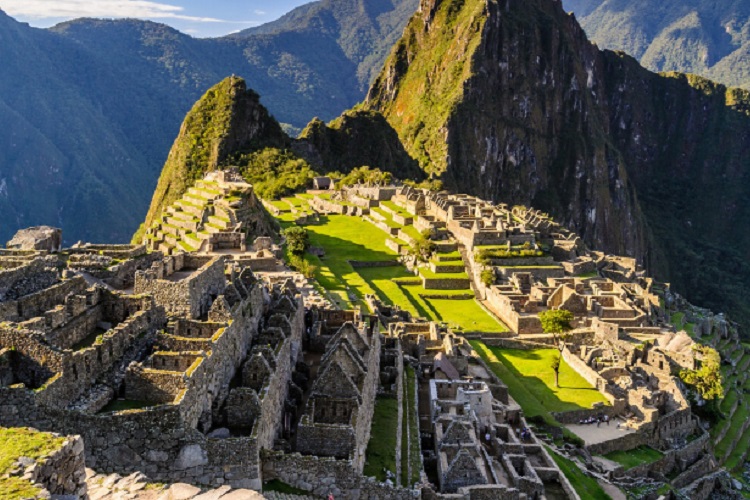 The treasured archaeological region of Machu Picchu, home to the iconic citadel of South America’s great Incan civilization, is soon going to receive major protection in the form of one million new trees.

Peru’s President Martin Vizcarra pledged last week that the celebrated UNESCO World Heritage site, which spans 86,000 acres (35,000 hectares) in the Andes Mountains, will be the focus of a new reforestation campaign that would see at least one million trees planted in the area. →

(Activist Post)  As the people of Chile enter the second month of massive protests against the neoliberal government of President Sebastian Piñera, clashes have continued unabated between demonstrators and the militarized security forces of the South American state. The protests, which began October 14 as a response to rising public transit costs, have quickly become radicalized as social movements, students, workers’ unions, and a vast cross-section of Chilean society have focused their anger on high levels of inequality in the country, rising living costs, and a constitution inherited from the 1973-1990 dictatorship of Augusto Pinochet. →

Chief of GRU military intelligence service Igor Kostyukov said the region is witnessing cases of extremist actions affiliated with terrorist organizations, including al-Qaeda and IS, outlawed in Russia Important News & Commentary about the Mass Awakening in Israel – video

Hello, fellow earth patriots, lightworkers and light warriors. I’m so excited to share with you important news from the last days and insights about the Mass Awakening in Israel. This is a topic very close to me and exposes things you may not be aware of.

Read more & video: “Important News and Commentary about the Mass Awakening in Israel” (59:48)

Trump is continually making the point that the stock market is up, NASDAQ is up and the economy is doing fantastic, he is using all the [DS] [CB] weapons against them and stopping the [DS][CB] from bringing the country into a recession. Trump and Xi are making a trade deal, Trump delays the tariffs. The Fed is talking about lower the interest rate. Xi put China on high alert to look out for a black swan and says complicated economic change is coming.

The Mueller report is coming and the [DS] is preparing for it, first they put out the narrative that the report won’t be what everyone expects, now they are saying Mueller won’t release the full report. Panic in DC. Venezuela is not what it seems, the MSM and the [DS] are pushing their agenda and Trump is pushing his. Former Iraqi PM says Obama played an important role in the creation of ISIS. Q drops more bread.

US industrial production plunges, this doesn’t mean that manufacturing jobs are not coming back to the US this means the [CB] is deteriorating quickly as Trump brings back manufacturing.Trump continually tells the media that the economy is doing well, it’s the best economy that we have seen in a long time, Trump is doing this on purpose to setup the MSM and [CB] later on. Xi and Trump are going to meet, they might have discussed on how to transition the economy moving forward.

Alexandria Ocasio Cortez creates bill to stop Trump’s NE. Maduro has secret meetings with US. The MSM is starting to realize this movement in Venezuela is not what it seems. Troops are being withdrawn from key areas in Syria. Q drops more bread, anons knew about the NE. Trump during his speech explains what happens next. Q explains that [HRC] protection is gone. Barr moves forward with the mission. Phase III begins, [DS] is in a panic, pain, justice is coming. There was coup planned when Trump came into office, the truth is about to come out.

The EU is now in a deep panic, they thought they were controlling the situation but now they realize the people are in control, they don’t want a no-deal BREXIT because it would expose them. EU commission slashes forecast economic growth is slowing. The [CB] economy in the US is hitting a tipping point, the entire system is ripping itself apart. Wikileaks dumps docs showing the DS used the CB system to weaponize their attacks on other nations. The CB are not independent they are the problem.

More proof the DNC was not hacked. Schiff pushes his agenda, wants to look at Trump’s business dealing, this has nothing to do with Russian collusion anymore. Schiff says he will release the House Intelligence docs, the only problem Nunes already did this. Whitaker pushes back on the house and says the will talk to the committee as long as it kept non political. Rand Paul makes the call, sets up a Senate committee to investigate those individuals who lied to congress. Senate opens up investigation into Epstein Island, the Senate was the key. The Neocons are pushing their agenda in Venezuela, it seems like there are two operations happening in Venezuela, one run by the neocons the MSM and other by the patriots. Melania sends a message about RBG.

The [CB] is now pushing the fear mongering to the extreme in the UK, they are now saying that if there is a no deal the country will turn into a mad max, post apocalyptic hellscape and the people would have to battle it out. What the [CB] is really saying is that the country will thrive and it will reflect on the EU and the ECB. ADP numbers show that manufacturing numbers have surged the most since 2012. Trump is finalizing the trade deal between Canada and Mexico. Trump tweets out a message about the gold standard, get ready for the transition.

OIG find to corruption amongst two FBI officials. Trump is waiting to declas and this is the reason why, he is using it as leverage and waiting for the 1st alarm bell. Trump says if the committee is not talking about the wall it is a waste of time. It has been reported that Trump does not need to declare a national emergency to build the wall. The Venezuela situation is heating up, Maduro agrees to talk to the opposition, Trump is now undoing everything the [DS] has put into place.Trump show how is pushing peace around the globe. Certain government officials are trying to block Trumps peace efforts. Trump is in the process of resetting the world.

President Donald Trump’s promise to defend the United States border from outside invaders seems to be paying off.

The migrant caravan of thousands of would-be illegal immigrants — some of whom have criminal backgrounds — lost a lot of momentum over the last week after Trump ordered the U.S. military to protect our nation’s southern border.

Now the caravan leaders are admitting defeat, and the group may be splintering into fragments.

Under pressure from the Trump administration, Mexico refused. Instead, it offered thousands of migrants asylum in their country.

Approximately half the caravan migrants accepted the offer to stay in Mexico. Those that remain seem unsure where to go next.

Without bus transportation, they face thousands of miles between their current position and the U.S. Waiting for them there are thousands of U.S. soldiers under order to defend the nation’s border.

The leaders of the caravan seem unsure of what to do next.

According to Fox News, the caravan started moving again Thursday morning towards Santa Maria Jalapa del Marque, but suddenly turned and started heading towards the coast and the city of Veracruz.

“The switch suggests that once the caravan gets to Veracruz, it may split in half, with some of the caravan probably heading to a border crossing about 600 miles away in McAllen, Texas. The other half may travel more than double that length to Tijuana, just across the border from San Diego,” Fox News reported.

Every day, more and more of the would-be illegal migrants are giving up and going back home.

“Of the friends that I have been with, all want to go back,” Hasiel Isamar Hernandez told The Associated Press earlier this week.

Without help from Mexico — and with Trump promising there’s no hope to force their way through America’s border — it’s expected most will simply go back home.

For Trump and his supporters, that’s a major win.