This was recently (December 2018) filmed over San Juan, Argentina. What do you think this is? Video

Two reporters were surprised during a live news broadcast when a box-shaped UFO started to cross the top of the giant TV screen. As the……Read more & video 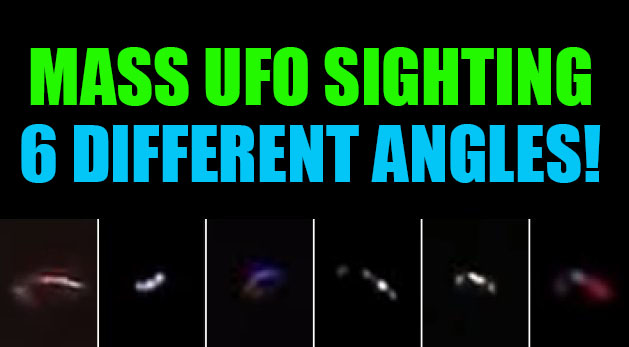 Every day, it seems there are more and more UFO sightings. While many of these could possibly be CGI, it becomes a lot less likely when mass UFO sightings occur from multiple angles.

In the following video, a mass UFO sighting occurs around the 16:50 marker:

In this sighting that occurred on September 26, 2018 in Bogota, Columbia, SIX different angles were captured from various witnesses. This is one of the distinguishing earmarks of credibility when it comes to seeing UFO videos in crowded areas. In the age of cell phones, where just about everybody owns one, an impressive UFO sighting in a populated area should be captured on at least two or three cell phones from different angles.

The video clearly shows a UFO with intermittent blinking lights that change colors.

Another impressive video is shown toward the end of this video where four large UFOs appear to be hovering relatively low to the ground.

You can find this at the 31:47 marker in this above video.

This sighting occurred in Rosarito, California on October 28, 2018.

I have the ATN NVG7-3 Gen 3 Night Vision Goggle

where in the past month, I saw the 2nd largest UFO that I’ve ever seen off the coast of the Gulf of Mexico by Siesta Key, Florida. It was much larger than any of the brightest stars in the sky and about 1/4 the size of the moon, heading southwest.

Numerous times, I’ve seen UFOs flying in formation and/or flying near one another. It’s becoming more of a common experience for many people, with or without night vision goggles.

It wouldn’t surprise me to see more and more mass UFO sightings from various camera angles in the next few months and years as it’s become evident that our galactic friends and neighbors are awaiting contact.

Perhaps, these are the reasons why many of us are hearing high pitched frequencies that are not associated with tinnitus or a Vitamin D deficiency?

Sending you all infinite LOVE & Light!

Coast to Coast AM August 25, 2018. Peter Maxwell Slattery is an author and experiencer, having witnessed hundreds of events involving UFOs and otherworldly beings. He joined guest host Jimmy Church to discuss his photographic and video evidence of unknown aerial phenomena, and his most recent sightings from August 2018 at James Gilliland’s ECETI Ranch. “It’s just amazing the activity that you have [there], around the mountain, on the mountain… you’ve just got to see it to believe it,” he said. Video: “COAST TO COAST AM – August 25 2018 – UFO & ET CONTACT”

A pilot flying from Montreal, Canada to Heathrow airport in the UK spotted “a very bright light” that had come up along the left side of their aircraft before it “rapidly veered to the north.” This is a common characteristic of UFOs that have been spotted by both airline and military pilots since the dawn of human aviation.…Read more & video: “UFO Buzzes Japan Airlines – FAA’s Callahan Reveals”

A saucer-shaped UFO has sparked an online frenzy after it was snapped on Google Maps Street View, which enables users to observe the world from […] The post Flying Saucer Spotted on Google Maps – UFO Captured on Street View in Bermuda appeared first on Latest UFO sightings…..Read more

The witness and videographer of this strange incident said that he saw a triangle-shaped UFO with blue and grey colour moving above his head in […] The post Blue and Grey UFO Spotted in London, England appeared first on Latest UFO sightings….Read more