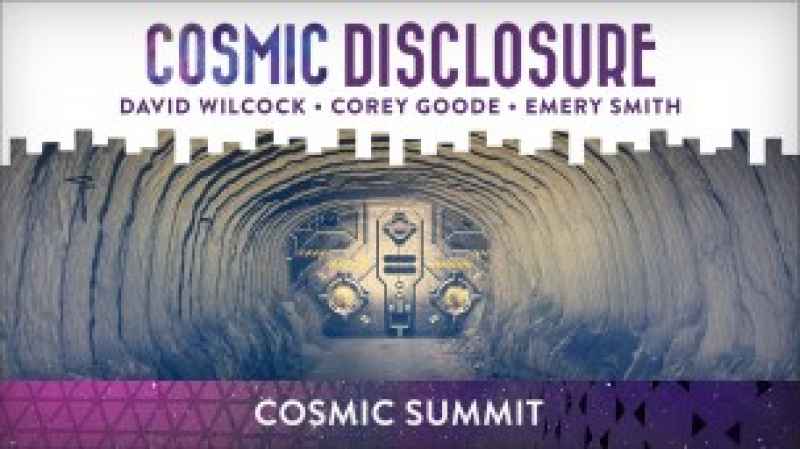 David Wilcock: Welcome to another episode of “Cosmic Disclosure”. I’m your host, David Wilcock. And we have a special treat for you: two high-level insiders who have never before spoken in any public or really private forum in the way that we’re going to right now.We have Corey Goode and Emery Smith.Emery, welcome to the….Read more

SecureTeam MASSIVE “Formations” Detected Under Antarctica 5/11/17 Published on May 11, 2017 Support the channel: https://www.patreon.com/ TheSecureteam Study: https://www.nature.com/articles/ncomm&hellip; Secureteam10 is your source for reporting the best in new UFO sighting news, info on the space coverup, and the strange activity happening on and off of our planet. Email me YOUR footage and help us continue the good fight…

It seems that the negative forces are being driven out of their underground bases and unable to maintain global control. The cleansing will continue until they no longer represent a threat to Humanity, allowing greater control by the Forces of…Read more

Clearing of the Chimera group continues. The Light forces are intensively clearing the head of the Yaldabaoth entity with all plasma anomaly and plasma toplet bombs and all plasma scalar technologies of the Veil. Realizing that they are going to lose, the Chimera have stepped up the plasma attacks on the key Lightworkers and Lightwarriors…

Transdimensional War, White Hats, Underground Bases
There is so much going on I don’t know where to start. The Republic was restored March 15th – the Globalists finally let USA Inc die – it was totally bankrupt. The G8 meetings keep getting sabotaged by globalist moles that want America to collapse and go into total chaos. They are being dealt with. The global currency reevaluation and the new currencies backed by gold have to come forward and they will.The white hats and generals who are honoring their oaths and maintaining their integrity are no longer playing games. Guns are being drawn. There is a grand house cleaning occurring between those loyal to the cabal: the Satanic, blood sacrificing pedophiles, and those who are loyal to God and Country. Be very clear and do not be misled as to which side of the fence you are on. Many have been part of a global psyops program and are unwittingly doing the bidding of the cabal. Do not forget they own the mainstream media. Many within that media will soon find themselves in very serious trouble.

Be very clear and do not be misled as to which side of the fence you are on.

The law, including Universal Law, is on the side of the White Hats regardless of those misusing their position and power to the contrary. The days of those loyal to the cabal are shortly numbered. There are 5th, 6th, 7th and now 8th dimensional Pleiadians here now – along with other beings up to the 13th dimension – all here to see the birthing process, the awakening and healing of humanity and the Earth through to the end.

Portals are opening around the world and others being closed to lower dimensions. The underground bases and Malevolent ET strongholds are being removed. No more interference will be allowed in the awakening and healing process. The benevolent ships will not land until the malevolent ETs are gone and this is well underway. They have the technologies to restore the Earth, heal and rejuvenate humanity. While it is imperative to use discernment – especially in the past – it is unwise and counter productive to demonize the benevolent Off Worlders and ancient ones based here for thousands of years. There are forces beyond our comprehension involved in this transdimensional clean up.

Many of you have been feeling something, like a great weight was lifted off your shoulders. Help has arrived in force and numbers unimaginable. That feeling is because much of the draconian grid of consciousness and technology just went down. Now with the added consciousness and energy of these higher dimensionals things will progressively and exponentially get lighter. There is a saying – resistance is futile. We have but one option if we are going to continue on Earth. Continue to heal and awaken, release the past and heal any wounds, traumas and wrong conclusions from past experiences. Or move on to another lesser world. Earth has chosen, does not matter how you refer to her, Gaia, Sophia, Terra she is ascending. The higher dimensional beings are here to insure this. They are the force behind the White Hats, if you want to call them Gods army it is most appropriate.

Seek Truth and Practice Kindness. When you pray and meditate ask to know. Know who you are and your part in this grand process.

James Gilliland
http://www.eceti.org
http://www.bbsradio.com
http://www.privateinvitationeceti.com
ECETI Official YouTube Channel
Instagram
You have my permission to send this far and wide.

ANTARCTICA – The most sadistic of lands; sub zero temperatures, unforgiving terrain, evil penguins perhaps; Antarctica is largely a mystery to civilians…but Happy Feet aside, have you ever questioned why? Antarctica, the coldest climate on earth, has always been shrouded in mystery. What we do know is it’s a desolate region and is the world’s…

via Mysterious: What Aren’t They Telling Us About Antarctica? — AnonHQ

Kauilapele’s Blog I’m getting this out as it seems the timing calls for it. This just came out yesterday, and there is a lot here to process. I’m only posting the text; no links or images. Please go to the original article to view all of those. If anyone wants to hear and view the…

The mysteries surrounding one of the world’s largest but least explored land masses continue to be revealed. From recent images showing what appear to be Pyramids similar to those of Giza to evidence of once-luscious rain forests, Antarctica seems to be giving up its secrets. Numerous political and religious leaders, including former Secretary of State John…

via Watch: The Mysteries Of Antarctica Revealed: “Someone Or Something Has Summoned The World’s Political and Religious Leaders to Antarctica” — The Daily Sheeple