“My understanding is that the Centers for Disease Control has recommended the use of masks but not required it because they don’t want to offend the president,” said Ms. Pelosi on ABC’s “This Week.”

Phi Beta Iota: If you want to live in fear for the rest of your miserable lives, vote Democratic.  This is such utter bullshit it may well lead to the end of the Democratic Party, which is already reeling from the departure of the Sandernistas and #WalkAway.  If POTUS passes #UNRIG Election Reform Act before Election Day, and engages authentic black leaders, and ends social media censorship and mainstream media lies, this could be an epic election. →

Individuals Join Together to ‘Walk Away’ From Democratic Party

Individuals Join Together to ‘Walk Away’ From Democratic Party 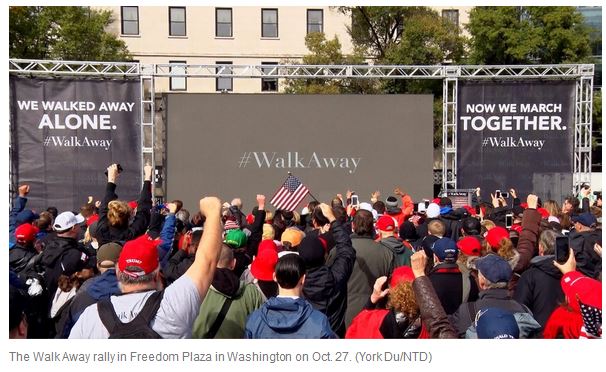 WASHINGTON—The mainstream media ignored it completely. President Donald Trump wrote about it on Twitter. And on a rainy weekend, the members of the Walk Away movement made a statement about recovering themselves and loving America.

The five-month-old Walk Away campaign—the joining of individuals who used Facebook to express their desire to leave the Democratic Party—became so much more than a hashtag, with a three-day festival marked by high spirits, fiery speeches, and a pretty good turnout, despite the cold rain.

On Twitter, progressive pedants posted photos from unflattering angles, seeking to prove that the crowd was smaller than the 5,500 claimed by organizers. Nevertheless, it was a triumph for the new, hybrid grassroots movement that, in some ways, has picked up where the Tea Party left off.

The motley movement that has confounded and enraged the left proved itself, first of all, to be human (not bots—digital creations used to manipulate social media—as some on the left had claimed), and humorous and determined, to boot.

On Oct. 27, with a short, 15-minute march in the rain from John Marshall Park to Freedom Plaza, Walk Away strode into the American populist, free-speech renaissance that’s exploding nationwide in the era of Trump. People descended from all across the country to attend the various events. One couple even came all the way from New Zealand.

The very same weekend, by sheer coincidence, hundreds of young black leaders were invited to The White House to meet with President Donald Trump, as Turning Point USA’s Candace Owens announced “Blexit,” referring to the divorce between American blacks and the Democratic Party. All across the city, patriotism was in the air, with chants of “USA” and “Walk Away.”

Submitted to Operation Disclosure | By Tina

One young Man was fed up so he created a movement that went viral called Walkaway. that turned into a huge march yesterday and today. Thousands of Americans many middle age and older who were tired showed up all Republicans, pro Trump, everyone was loving. With one thing in common there sick of the division, false flags, lies and negativity. Thousand of people showed up with flags, speakers, musicians, sharing feelings and thoughts this is what America use to be like. Something beautiful happened this weekend and its wonderful to stop and take in just relax everything is going to work out our future is going to Glorious~~~~