October 31st, 2018 By Kelly Brogan, M.D. Guest writer for Wake Up World We know that all drugs have side effects. That’s just part of the deal right? But is it really possible that an antidepressant can cause a sane person to act like a cold-blooded criminal? I imagined my audience would be wondering as much as…..Read more

via What’s the Harm in Taking an Antidepressant? — Wake Up World

The stock market continues to show signs of instability which will ultimately lead to a crash.

The new Quantum Financial System (QFS) has been active since the beginning of October and is ready to replace the old fiat financial system once it collapses.

Paid actors and rioters are expected to cause chaos in the streets when the US Democratic party loses the mid-term election.

Various democratic party officials will be exposed of their crimes.

A purge operation on the Cabal and their malevolent ET masters is scheduled for 11/11/18.

If the Cabal and their masters do not surrender on 11/11/18; the purge operation will begin and it will be public.

Their failure to surrender will result in their total demise.

The old fiat financial system is expected to crash at any moment.

Once it crashes, the private redemption event (RV) will begin and the QFS will replace the old financial system.

Expect a couple of weeks time from the start of the crash for all countries to adjust to the QFS.

Changes that are coming

The Deep State’s control is fast coming to an end

The centuries-long tyrannical regime is reaching its termination stage

Thousands of centuries of criminal extortion

The Deep State’s control is fast coming to an end. They never expected this, so they are not prepared for it. Their lackeys – the puppets – in governments all over the world will find themselves in deep trouble. They are being believed less and less with every passing day. They are being exposed and must eventually face the wrath of the people whose lives they have maliciously exploited. President Trump, on his short visit to England, was there for only one reason: to confront the Queen of England with her malevolence and to demand the return of all that was stolen, to which the Queen agreed.

He didn’t want pomp and ceremony. He has the respect of all who seek truth. It was a pity that there were those in England who set out to disrespect him. They were either paid for it by George Soros, or displaying their own ignorance about what is going on in our world. President Trump deserves every respect and success in his endeavour to free the world from the criminal mafia that has terrorised and exploited the populace for thousands of centuries.

Politics is a dirty game. President Trump is not a politician, so he is free to follow his conscience. This is why there is such a huge effort to remove him from office. There have been to date over a dozen assassination attempts. The Cabal is petrified of him because they cannot control him. Never in the history of our world has there been such an effort to remove a President from his Office. The Cabal is ruthless and desperate to hold on to their power and control, which again is why numerous assassination attempts have been undertaken. To fulfil this monstrous task, you must really be driven and totally convinced of the ability to improve the world for all of humanity, for it is the most ungrateful job to fulfil. There is no glamour and money involved, commonly belonging to such a position.

People will be shocked to learn the extent of the Cabal’s control over them. Every aspect of our lives is covered. Even in the world of sports, where it is believed that the best man, woman, or team wins. Be assured it is often decided in advance by them, because they are the owners of the game, and have set their huge bets on their designated winner. They never leave anything to chance. They control all; much more than you ever can imagine.

Welcome to the next wave!  Yes, the resting period was very brief but, there is much to be done!  Over the next few weeks, it will seem as if every….single….thing you know and feel about yourself is being challenged.  Under no circumstances should this be viewed as a negative thing.  Instead, it is an opportunity for you to stretch beyond your comfort zone, to explore options not thought of and give you the gift of expansiveness.  On your Earth plane there are many things that are viewed as finite.  You know there is much more to your existence than what is being presented to you.  Now is the time to explore, break those bonds and step into your own personal infinite!  As always, The Universe is loving and supporting you through it all. ~ Creator 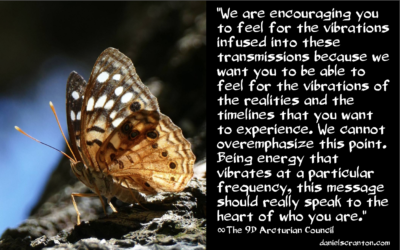 We have discovered that the true path to connecting with you is to provide you with information, and we would like to change that. We know how important it is for all of you to begin feeling for different vibrations and determining which ones are resonating with you the most. So we are working on shifting the vibrations that we infuse into these transmissions, because we want you to feel us even more than you understand what we are projecting.

We are not using words, but we are sending you transmissions that the channel here then translates into words that you all understand. This is how we keep you interested. We have also noticed that when it comes to your process of creating the reality that you want to experience, most of you are still using words, thoughts, and actions to attempt to get to the places you want to go.

Becoming the vibration of that which you seek to experience is the fifth dimensional way, and it is the way that we are encouraging you to start practicing now, here in the fourth dimension. Practice, practice, practice, and you will succeed. We know it, we can see it, and most importantly, we can feel it.

ENDS TONITE – Get a Private Session with The Arcturian Council (or any of the other beings I channel) for 50% Off. Enter Discount Code LOVE at Checkout

We have entered a new paradigm, a new dimensional space.

The third dimension is fading as we try to fathom the fourth. We are now operating in the fourth dimension. The rainbow children, indigos and light workers have raised the vibrations beyond the 3d matrix. Phase 3 the fourth realm has been reached.

The collective consciousness has awakened. The hard, dense karmic armour cloaking us has been cracked open.

Ascension has begun. The event is happening.

One of the fundamental errors in thinking about measles vaccine effectiveness is that receipt of measles-mumps-rubella (MMR) vaccine equates to bona fide immunity against measles virus. Indeed, it is commonly claimed by health organizations like the CDC that receiving two doses of the MMR vaccine is “97 percent effective in preventing measles,” despite a voluminous body of contradictory evidence…..Read more

“Art changes people and people change the world,” -Layla Love. When art is paired with social purpose and given license for personal transformation, it becomes a transcendent force of nature with the power to shape all who come into contact with it. Rise of the Butterfly is applying this profound wisdom to address the issue…..Read more

via Rise of The Butterfly: Artists Tackle The Issue of Human Trafficking — Collective Evolution